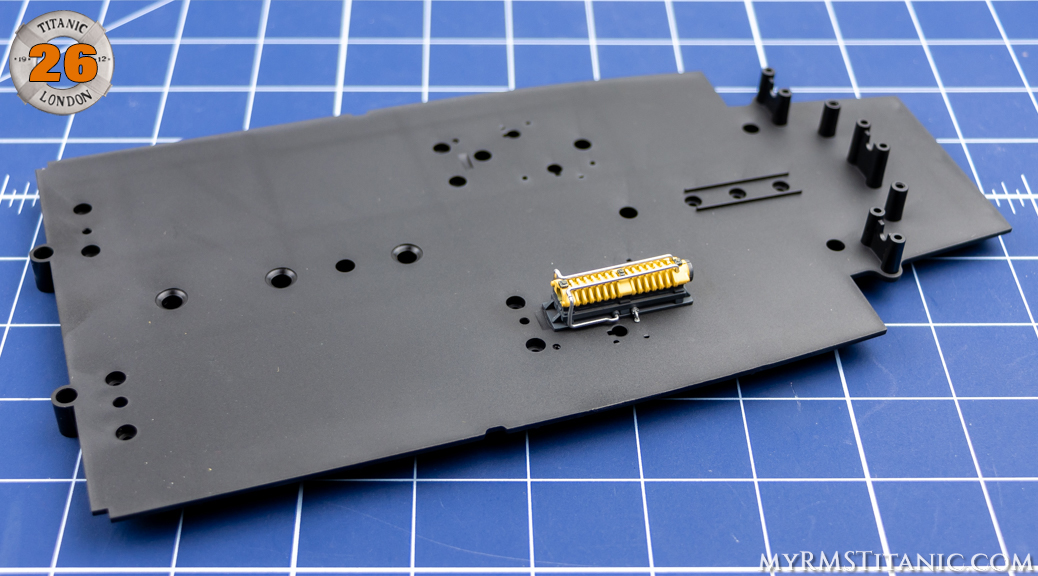 In this issue, we will begin assembly of Titanic’s enormous engine room with the port thrust block.

Materials: All of the parts in this issue are plastic. 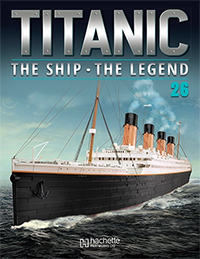 NOTE: To make sure we don’t have any problems later on, I used super glue to secure these two parts tightly together.

Fun Fact: A Thrust Block is designed to transmit the driving force of the propeller to the ship’s hull, creating motion. It is basically a oiled shaft with multiple discs attached to it that impart the pushing/pulling energy into the ship’s structure and not directly into the engine itself.

It is very likely that this Thrust Block would not have been silver on the real Titanic, therefore I chose to repaint it in some other colors. First, I masked off the ‘base’ section of the Thrust Block with Tamiya 6mm Masking Tape: 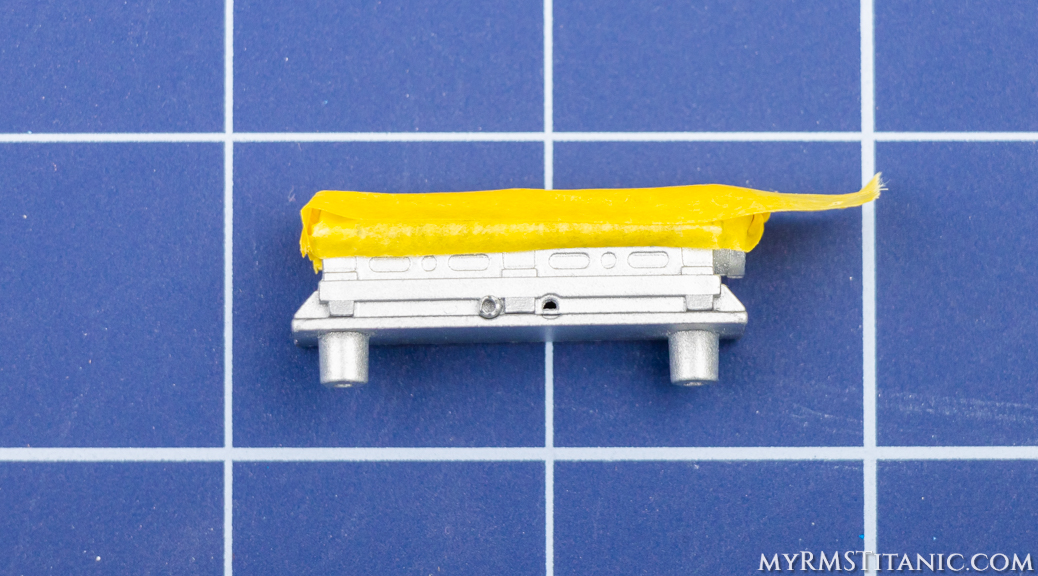 Next, I airbrushed this ‘base’ section with the same Vallejo Model Air 71.054 Dark Grey Blue acrylic paint I have been using on my deck Bollards and Cargo Hatch combings. Once the paint dried, I removed the masking tape: 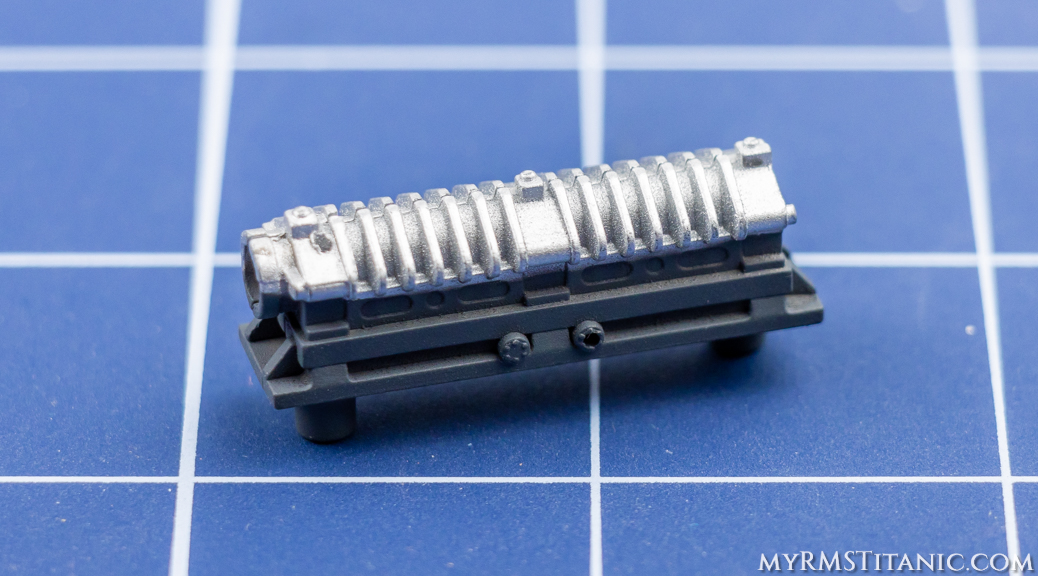 Then, I masked off the ‘upper’ section and airbrushed it with the same Mission Models British Sand Yellow acrylic paint that I used on the Engine columns. I also painted the top half of the rear ‘ring’ (arrow below) with the Dark Grey Blue to match the base: 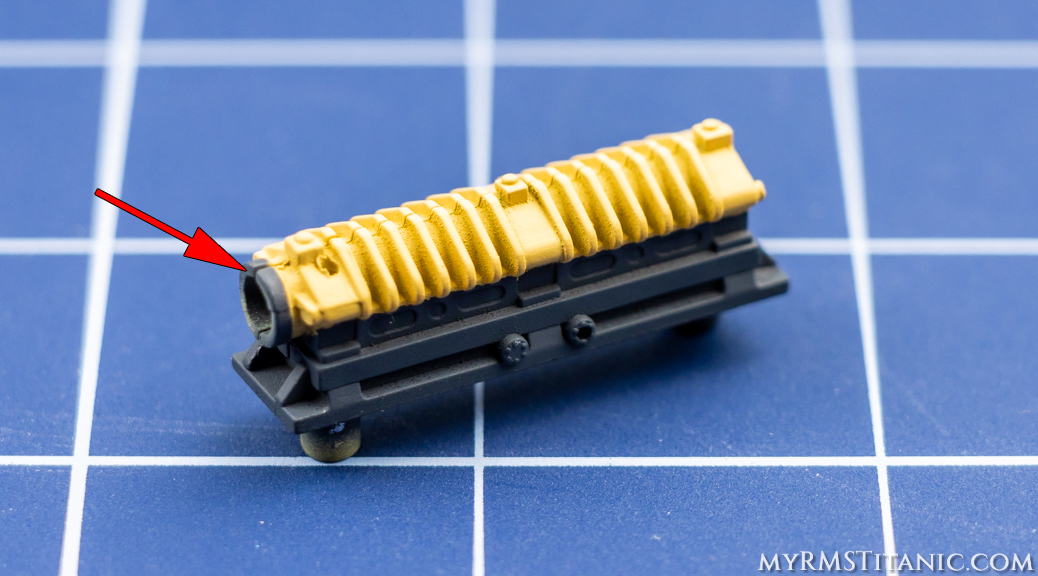 Finally, I used a bit more Dark Grey Blue to lightly wash the three tiny ‘cubes’ on top of the Thrust Block for a bit of contrast. I don’t know how accurate this is, but I feel it looks much better than all silver: 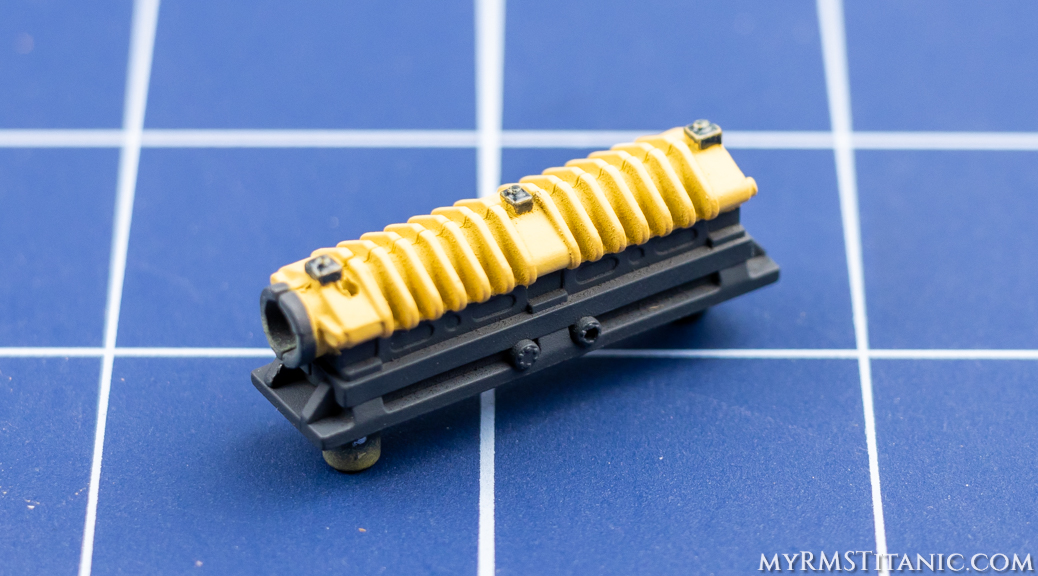 NOTE: I am going to deviate from the instructions a bit here, hopefully this way will make things easier to follow.

Arrange the remaining four long Pipes on your work surface as shown. These are their part numbers and orientation: 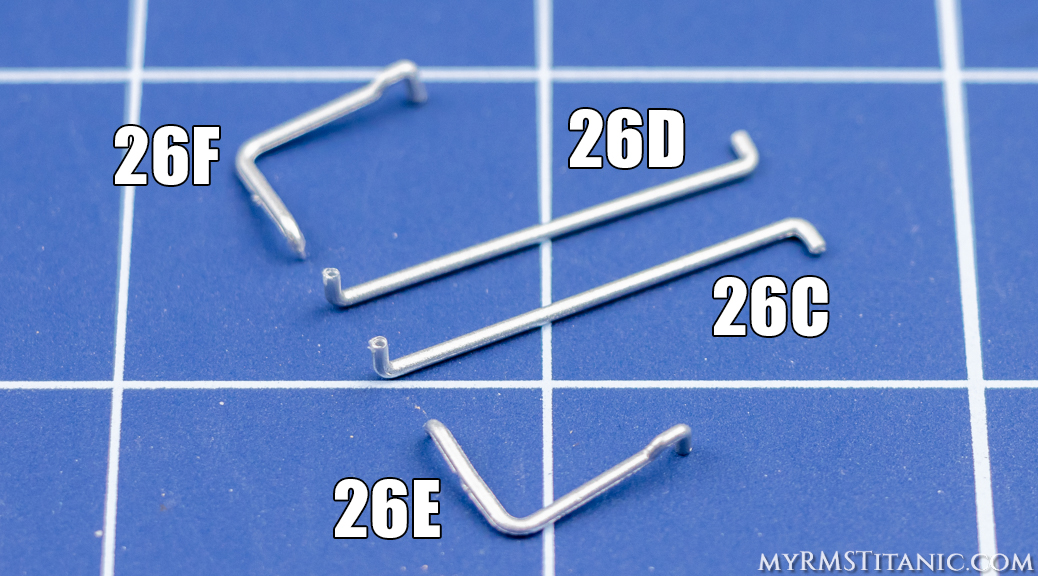 Test fit all four pipes by inserting them into the matching holes of the Thrust Block, as shown. Circled below are the two pin and hole junctions between each pair of pipes. I did not glue anything yet as you may find it necessary to remove any flashing or burrs from the ends of these Pipes using a hobby knife or sandpaper to make for a better fit: 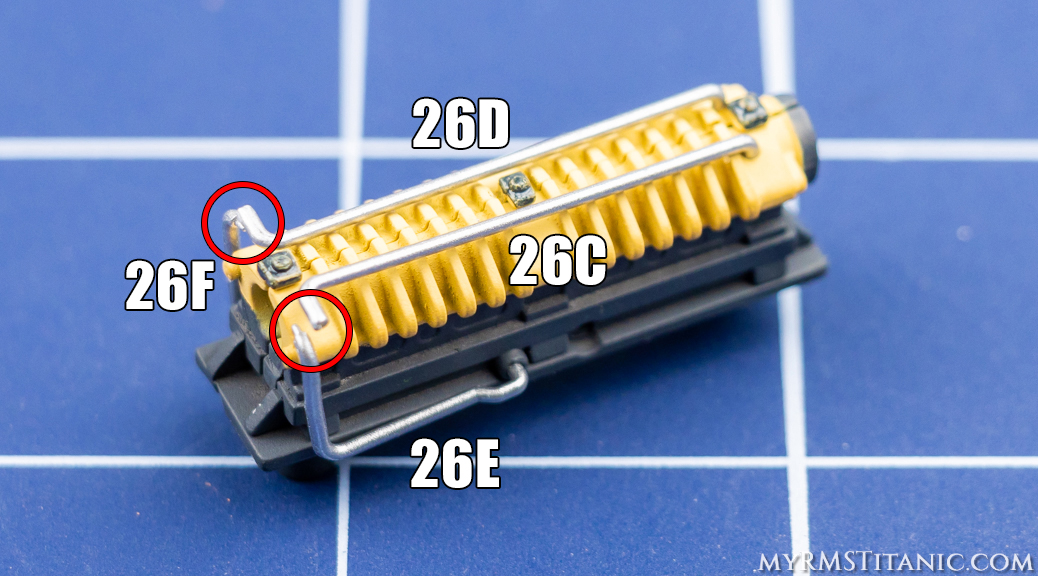 Once we understand how the pipes fit to the Thrust Block, we can remove them all and install each one by one.

Glue the rear end of the Short Pipe for Port Side (26E) into this left-side lower hole of the Thrust Block, orientating the Pipe as shown.

The horizontal section of this Pipe should be flush to, and parallel with, the base of the Thrust Block: 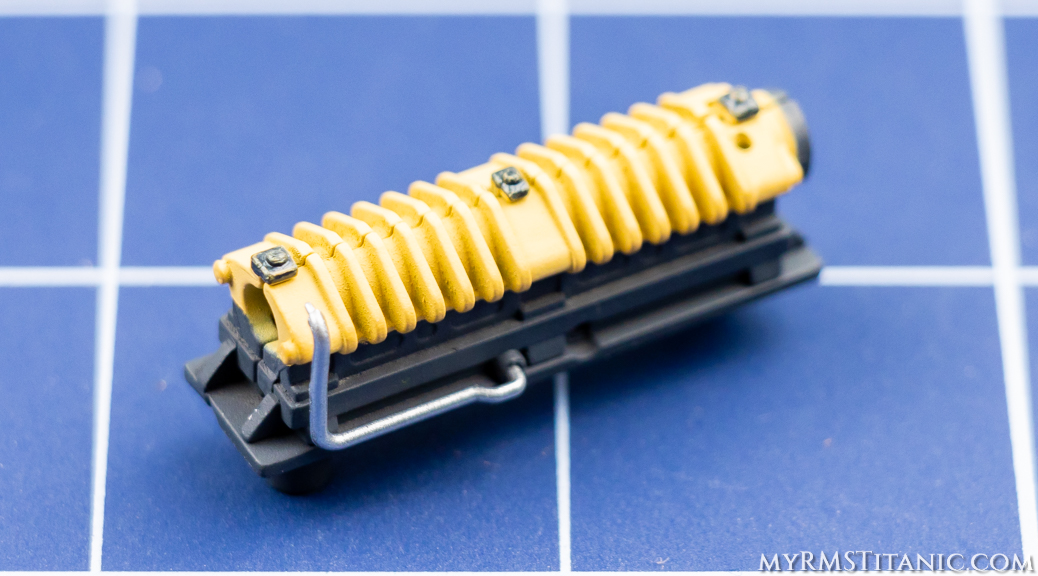 In the same way, glue the rear end of the Short Pipe for Starboard Side (26F) into this right-side lower hole of the Thrust Block, again orientating the Pipe as shown: 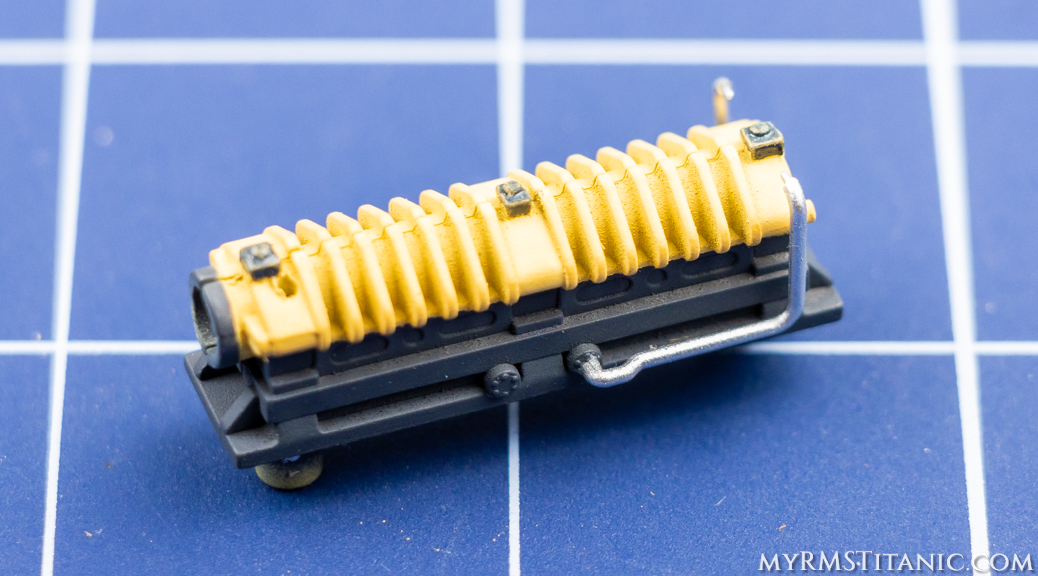 Glue the rear end of the Pipe for Port Side (26D) into this top-right-rear hole of the Thrust Block, orientating the Pipe as shown.

This Pipe should be come straight up out of the Thrust Block and then move forward parallel to it. Once we have this aligned correctly, we can also glue the pin on the end of 26F into the matching hole at the end of 26D (circled below): 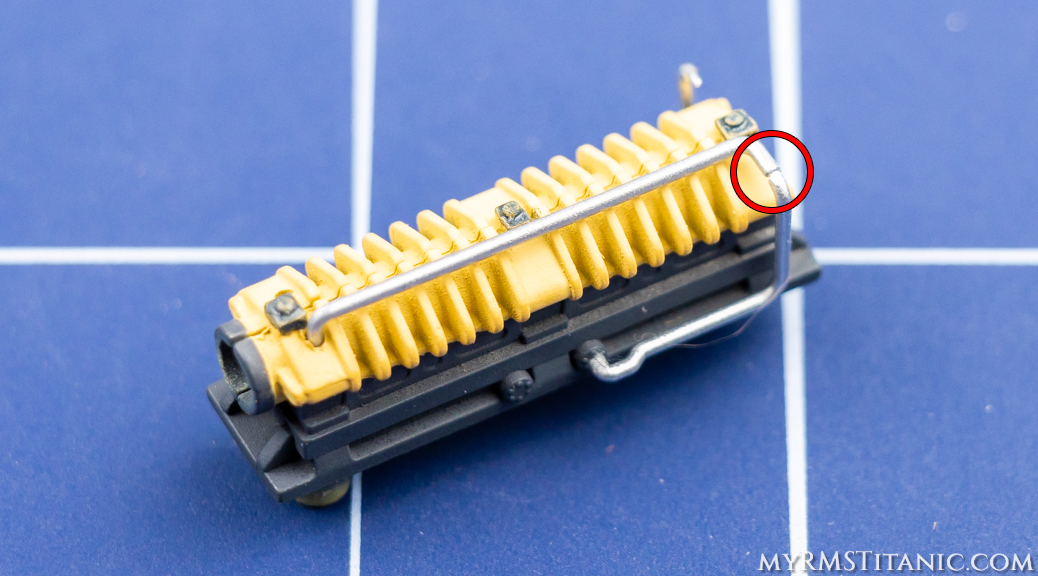 Finally, glue the rear end of the Pipe for Port Side (26C) into this top-left-rear hole of the Thrust Block, orientating the Pipe as shown.

This side is fitted in the same way as the starboard Pipe. Both long Pipes should end up parallel to each other and to the Thrust Block. Don’t forget to glue the pin of 26D into the matching hole of 26F (circled below): 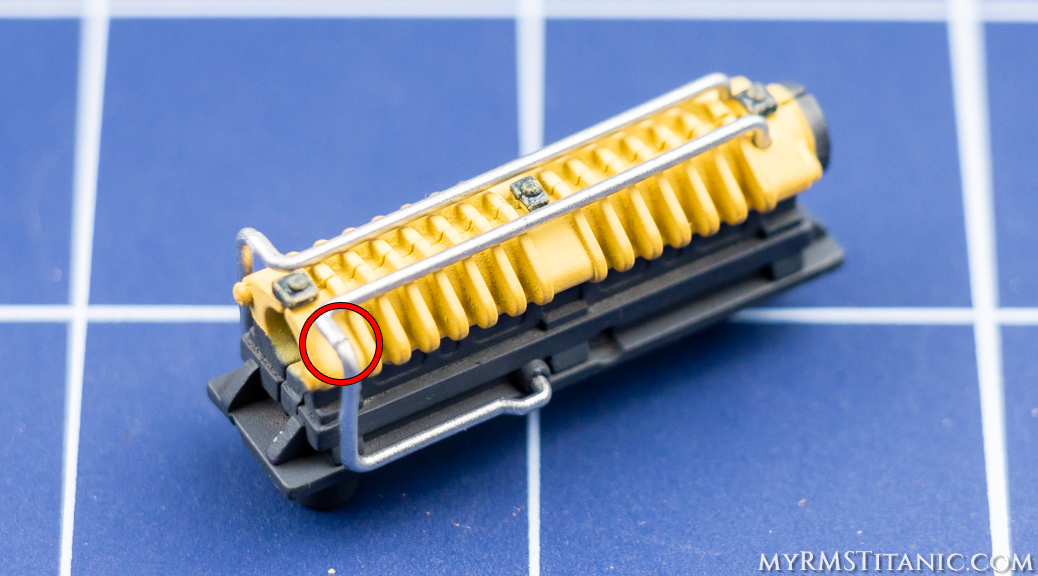 Fit the two bottom posts of this Thrust Block assembly into the matching holes at this location of the Deck for Engine Room.

Note that this Thrust Block sits just to the rear of a curved recess where the engine’s Crankshaft Cog sits. Make sure the part is orientated correctly with the Pipe junctions towards the front of the ship, as shown: 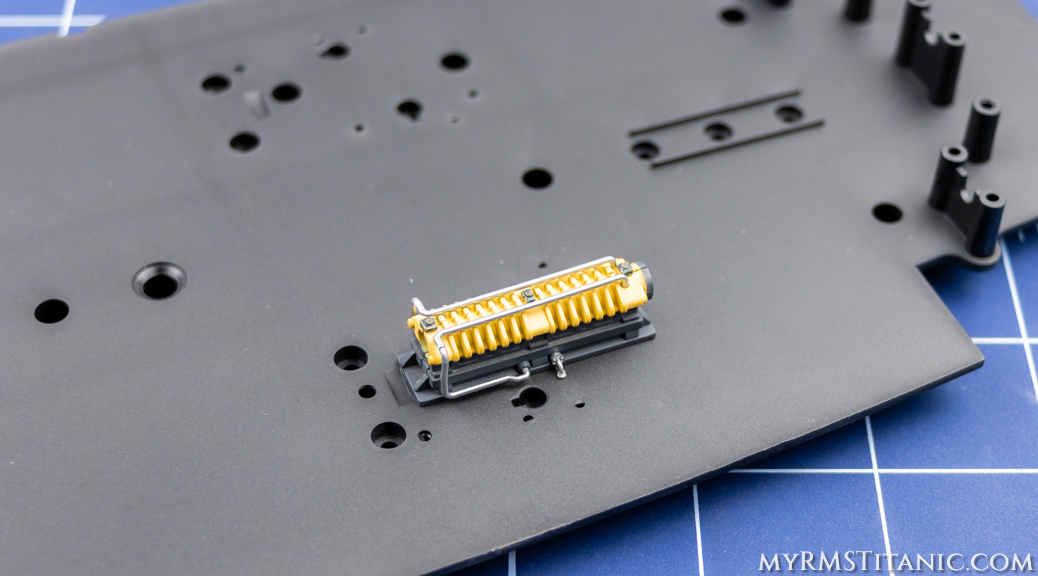 Glue the D-shaped pin of the Elbow Pipe into the matching hole on the left side of the Thrust Block, as shown.

I waited to do this step so I could make sure this Elbow Pipe would actually touch the floor of my engine room Deck: 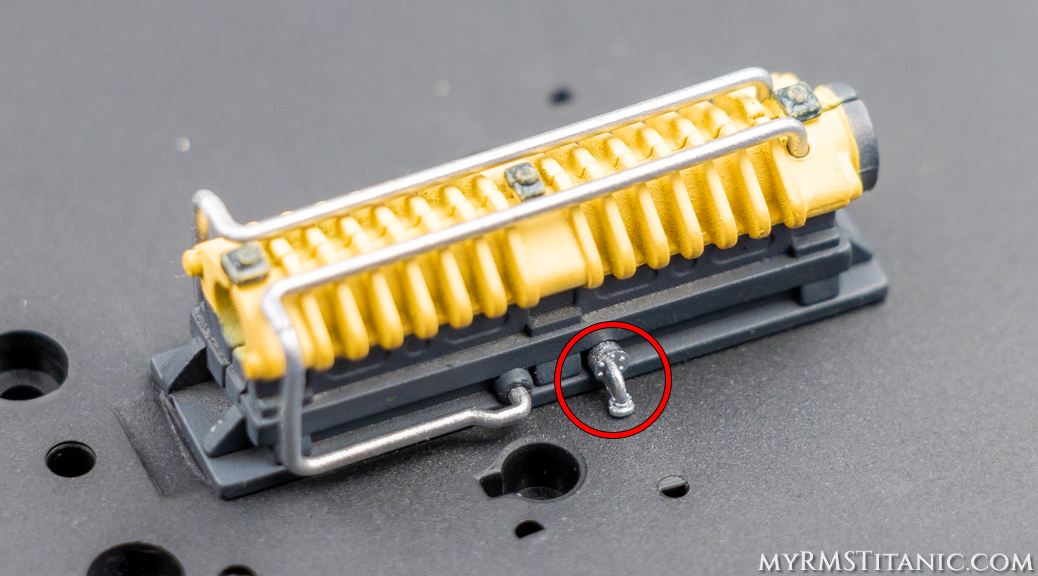 Secure the Thrust Block into place from below with two (2) EP screws.

To give the Crankshaft Cog of the engine assembly as much clearance as possible, I recommend sliding the Thrust Block as far to the rear of the Deck as possible before tightening these screws. It won’t move much, but it might help: 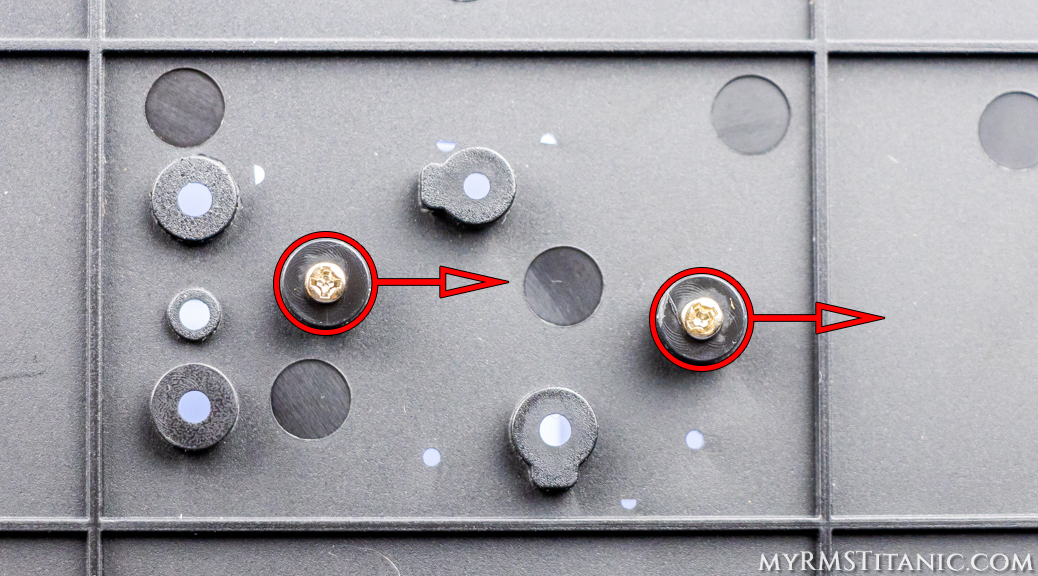 The clearances I mentioned above are because if your engine’s Flywheel Cog was not fully seated when you glued it to the Crankshaft, it can rub up against the Thrust Block, or even prevent the installation of the engine assembly entirely: 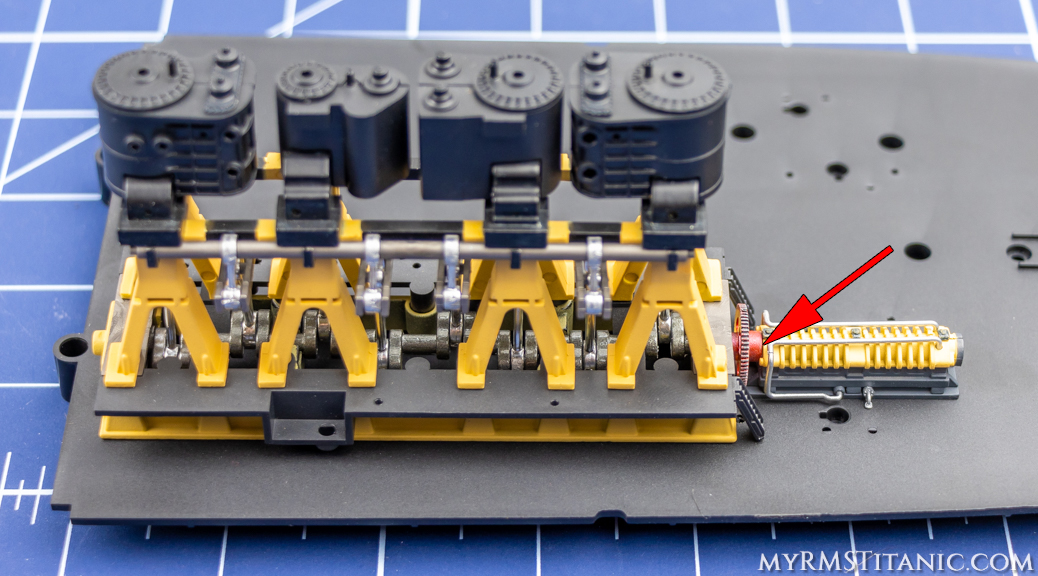 When I installed my Flywheel Cog, I only pushed it on far enough that it would not rub on the engine. It turns out, this was not enough to clear the Thrust Block without rubbing. Therefore, I simply sanded down the exposed center hub of my Flywheel Cog until it fit nicely without friction: 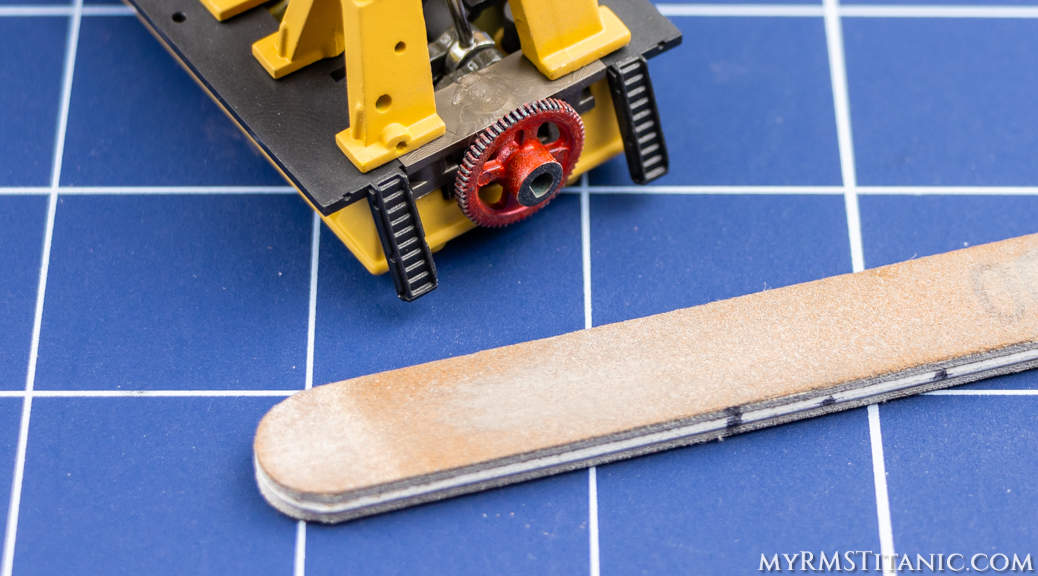 Oh, the engine room – I have been waiting for this part of our Titanic build for a long time! I am glad I repainted this Thrust Block and left the Pipes silver. It adds some nice color and contrast to otherwise monotone parts. In our next shipment of issues, we will be starting construction of our starboard side main engine. I’m so ready!