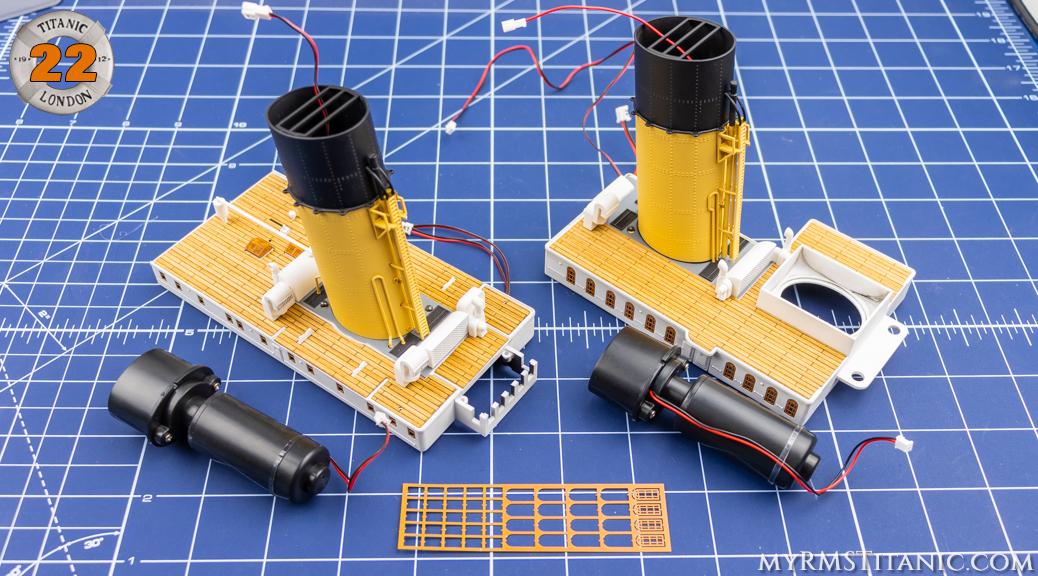 In this issue, we will install windows on our two superstructure sections, lighting to our first class stairwell, and extend the wiring of the second funnel.

Materials: The Windows are photoetched metal and the non-electronic parts in this issue are plastic. 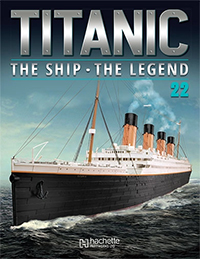 Windows for the Superstructure

On the real Titanic, the Rectangular Window frames for the windows of the Officers’ Quarters superstructure were actually made of brass. To simulate this color (and make it different from the passenger section windows), I masked these windows off and airbrushed them with Vallejo Model Air 71.032 Golden Brown acrylic paint. I decided against using an actual brass metallic paint here as it would not look right in scale: 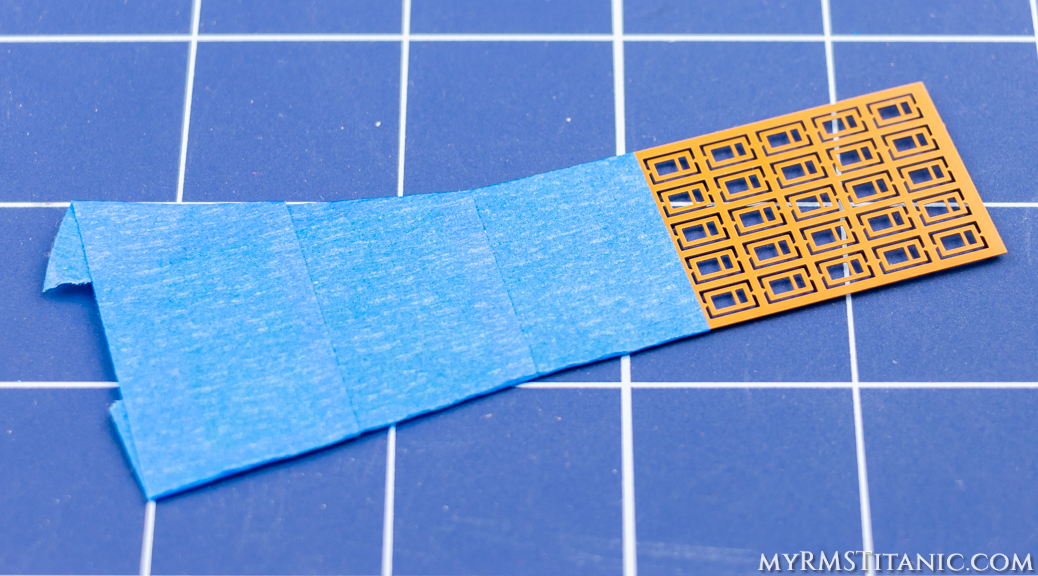 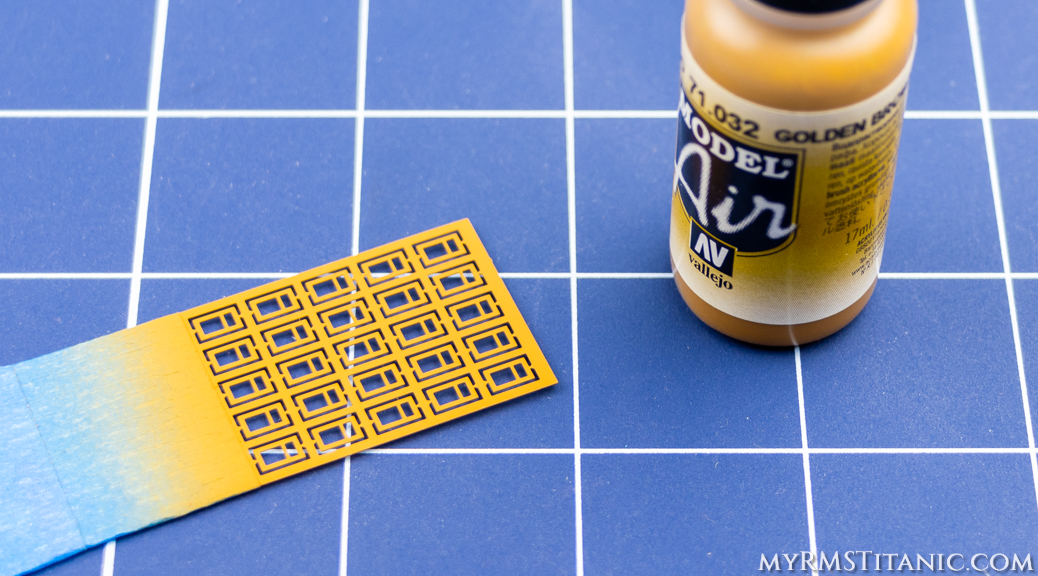 The color difference here is not as apparent due to the bright lighting in my studio. However, it is actually quite noticeable in person: 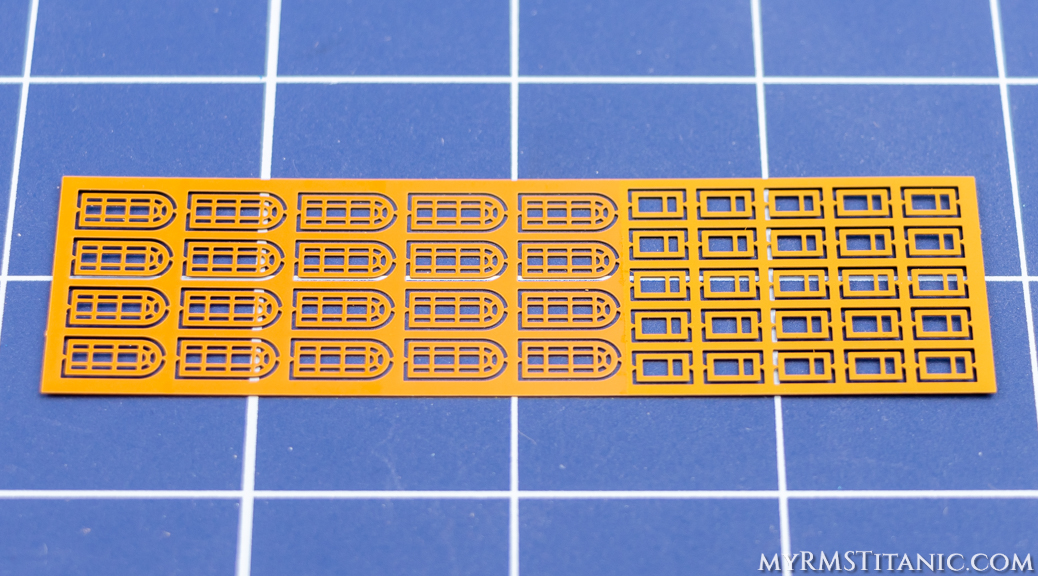 Carefully cut the twenty-five (25) Rectangular Windows from the photoetch sprue.

As before, I used a #10 rounded blade in my hobby knife on a small cutting board to remove these parts: 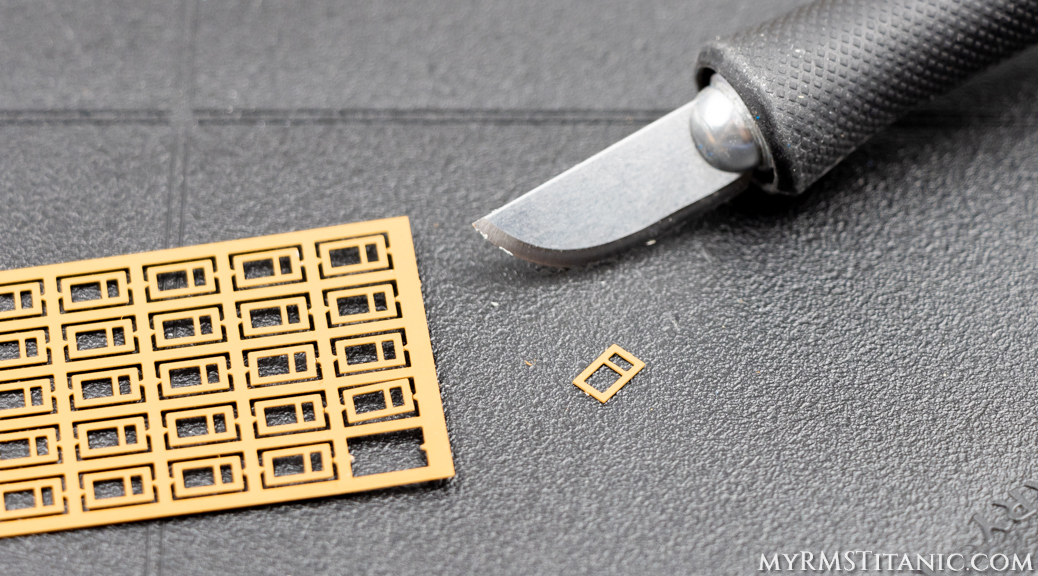 Any burrs left behind can be removed with sandpaper or a metal file. These parts are tiny and no spares are provided, so take care not to lose them: 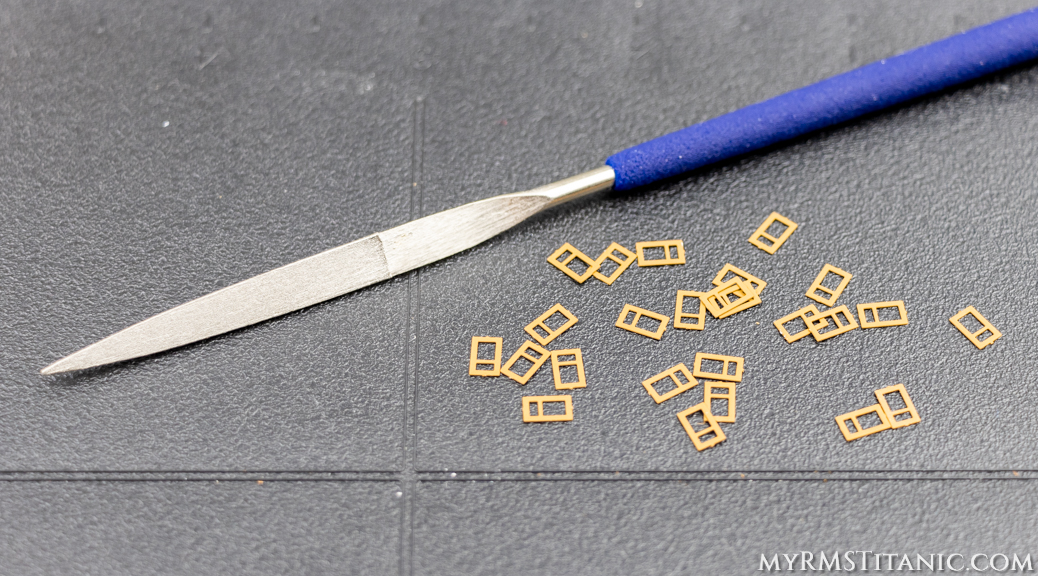 Retrieve your Officers’ Quarters assembly from Issue 20. Super glue twelve (12) Rectangular Windows into the matching window openings along the starboard side of the Officers’ Quarters. Note that the glazing bar goes at the top of each window.

It is recommended to prop this assembly up on its side so the starboard (right) surface is facing up: 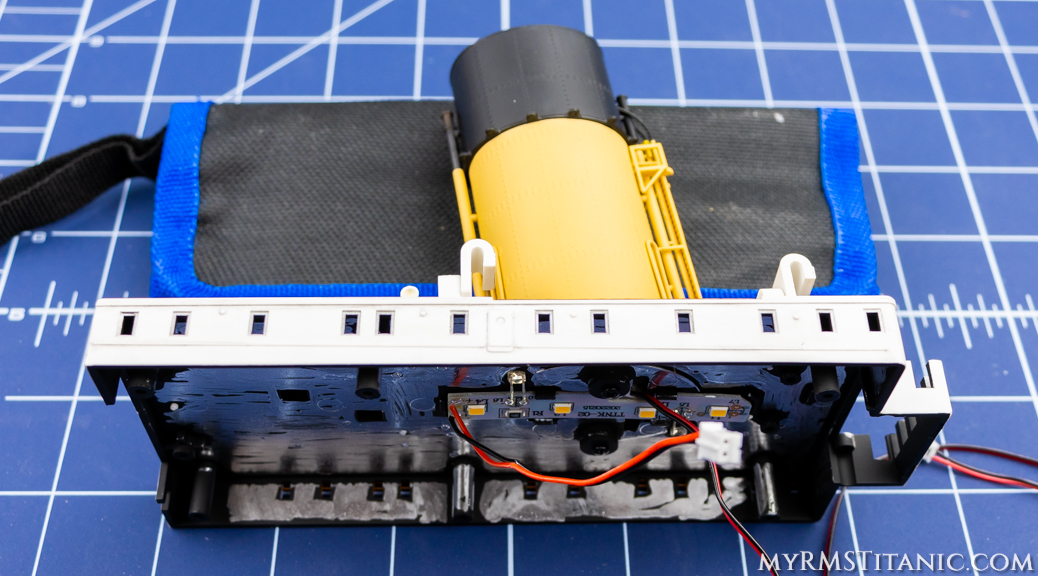 Working on one window at a time, I applied a couple tiny drops of super glue onto the recessed ledge of a window opening. Then, I used fine-point tweezers to carefully place the window in the opening, with the glazing bar (middle crossbar) towards the top of the window opening.

TIP: Picking the windows up by the glazing bar will likely make it easier to set each window in place: 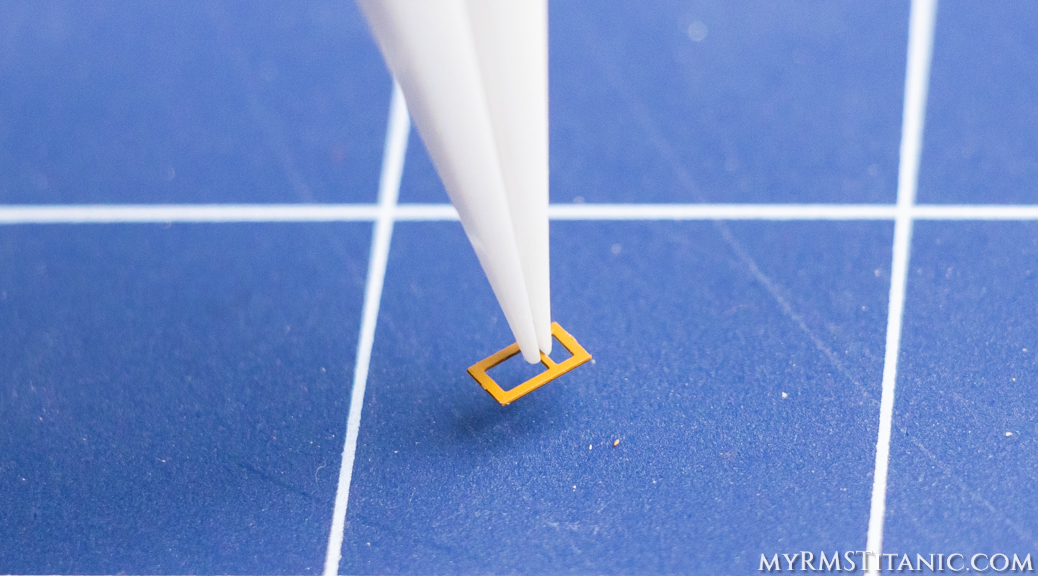 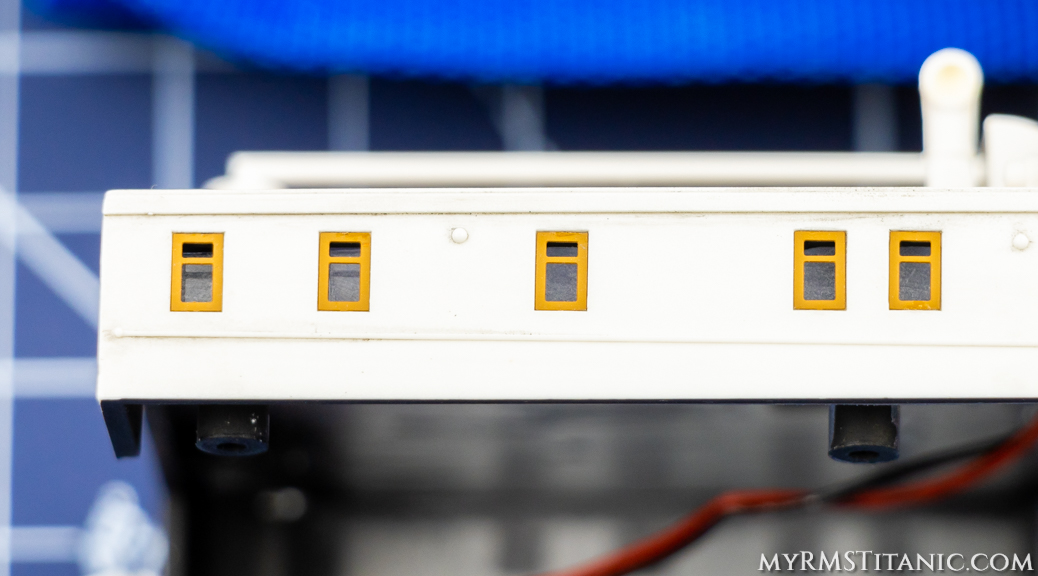 Finally, repeat this process for the remaining Rectangular Windows on this side, and then allow the glue to set: 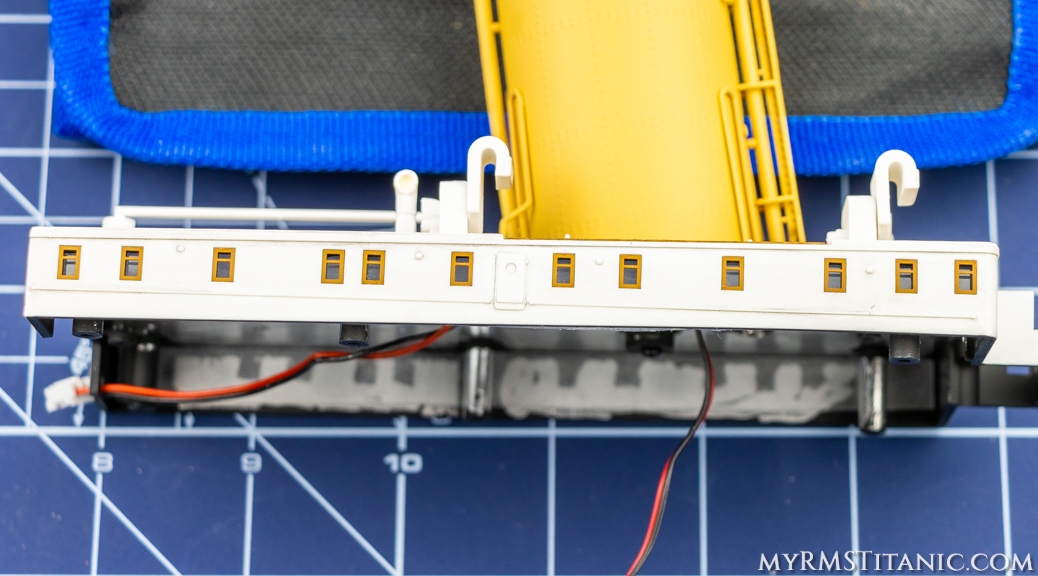 In the same way, super glue the remaining thirteen (13) Rectangular Windows into the matching window openings along the port side of the Officers’ Quarters as shown: 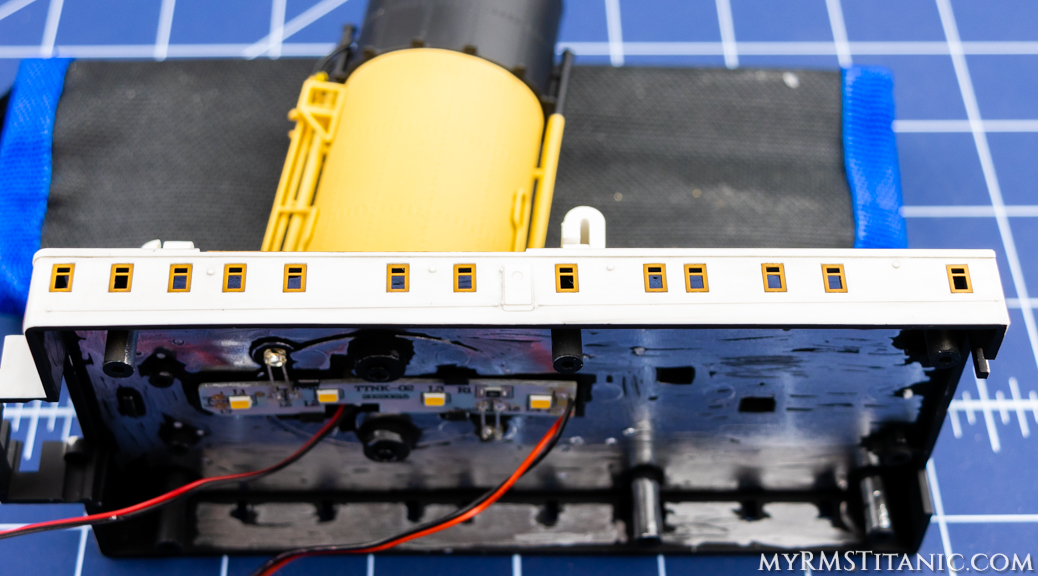 Once these are cut free, there will still be four Arched Windows left on the sprue: 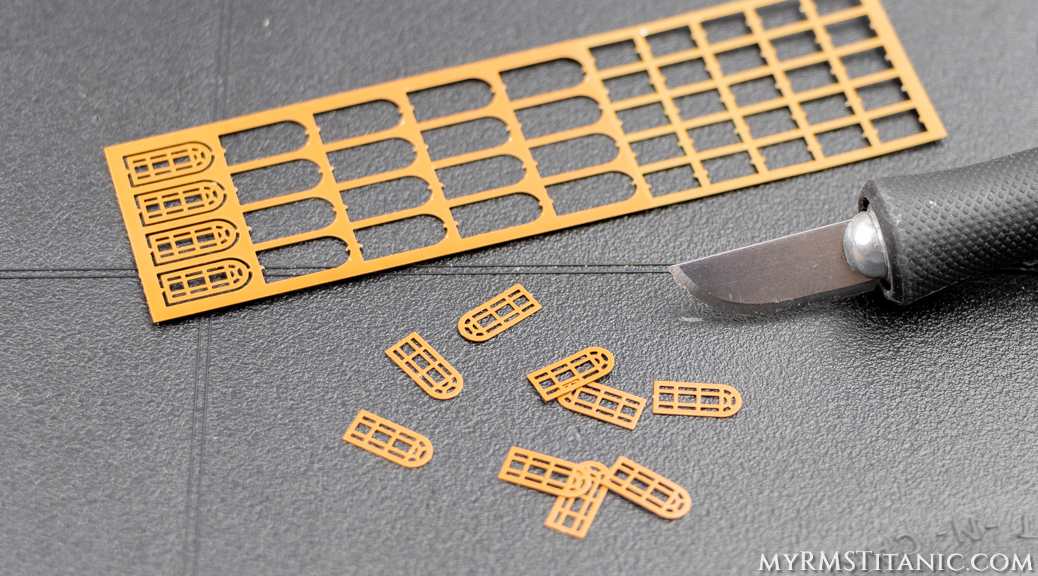 Again, I propped this assembly on its side to glue these windows into place. Be sure to allow this glue to set before moving on to the next step: 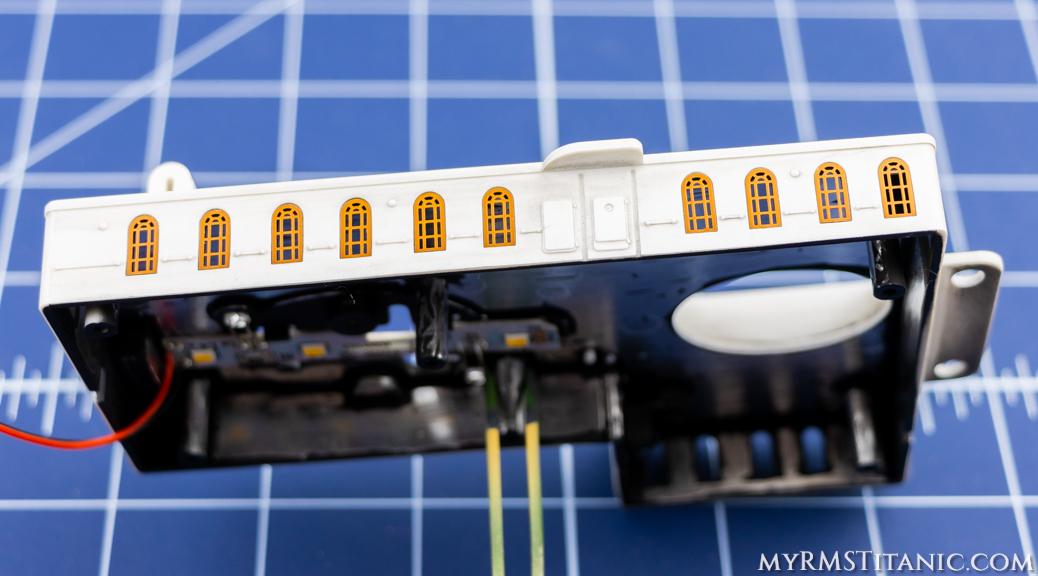 The eleventh Arched Window is around the corner on this rear wall, as shown here: 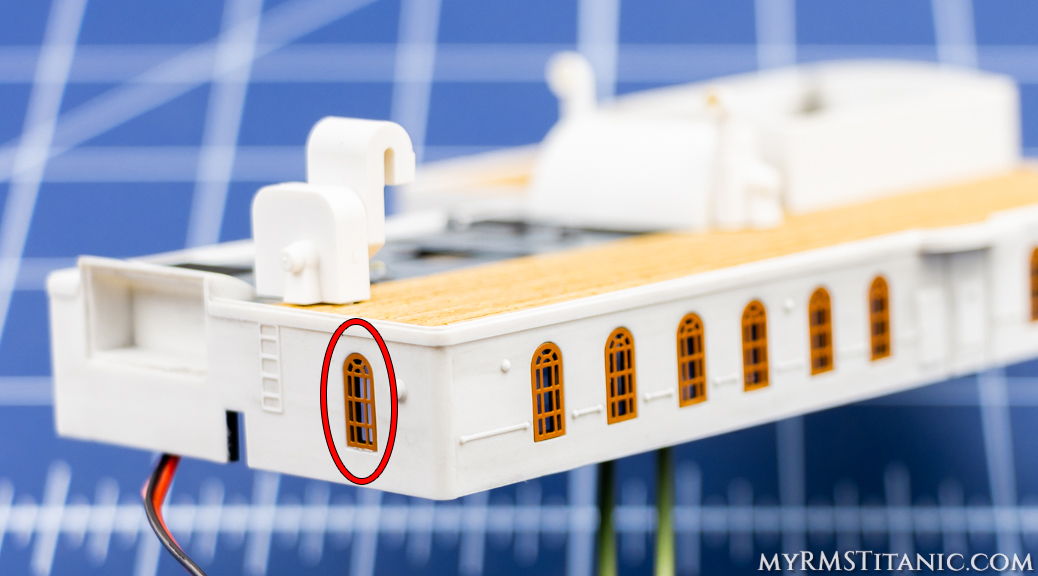 Super glue five (5) Arched Windows into the matching window openings along the port side of the First Class Stairwell superstructure: 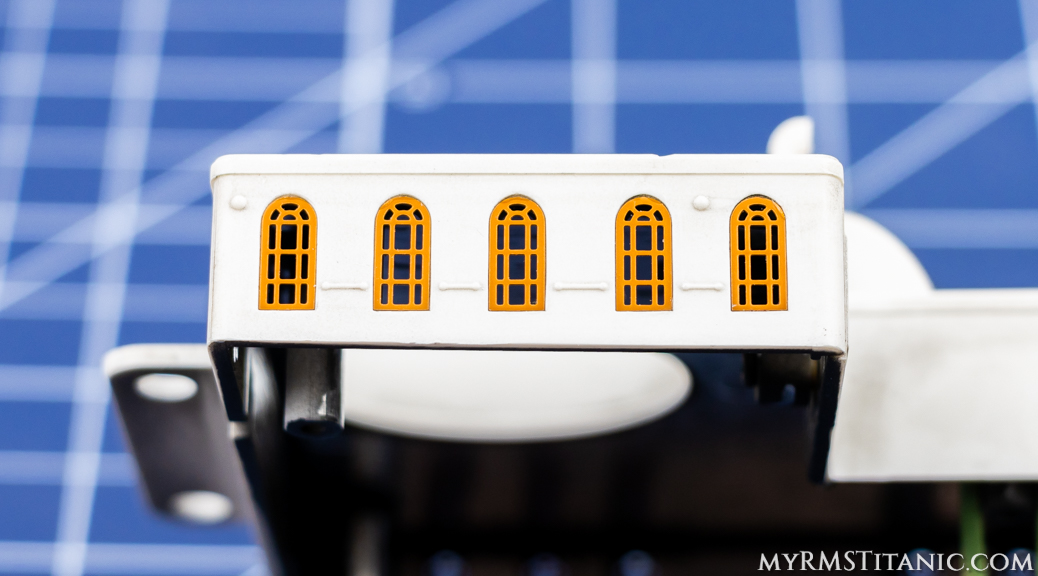 Temporarily connect the LED Strip J2 to the MOT/LED socket of the Smoke Generator Tester Unit from Issue 3 and install 2 x AAA batteries (not included). This will allow us to test the operation of the lighting. Then, fit this LED Strip J2 into the underside of the First Class Stairwell superstructure, aligning the round LEDs into the matching holes. There are four clips that hold this LED Strip J2 in place.

As before, while aligning the round LEDs into their holes (circles below), I slid one edge of the LED Strip under two of these clips (arrows below). To make sure this is installed the correct way around, note that one end of the LED Strip has a cut corner that matches an angled ridge on the superstructure: 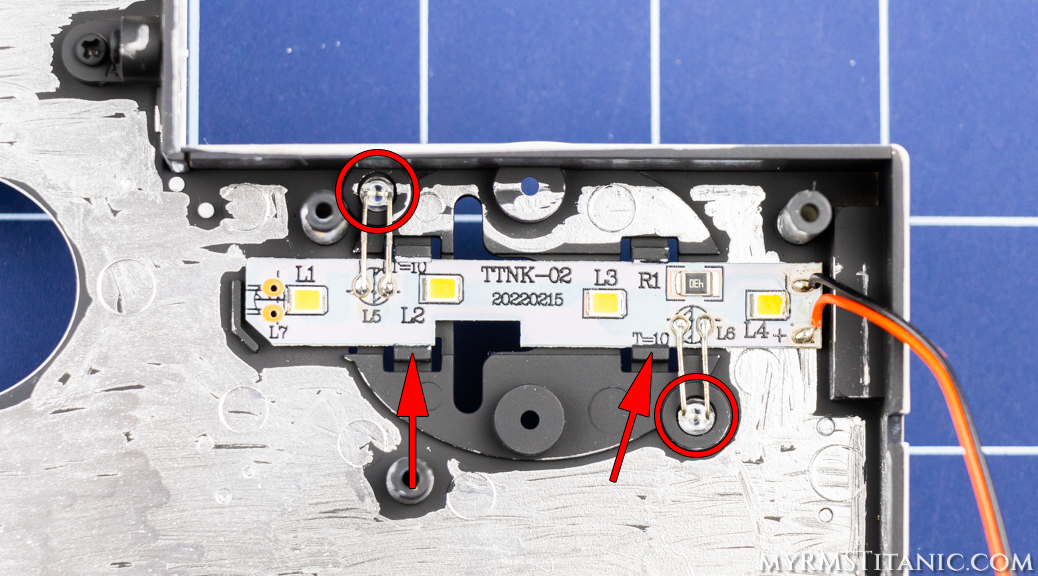 To attach the other edge of the LED Strip, you may want to use a screwdriver or other tool to move the clips aside from above, as shown: 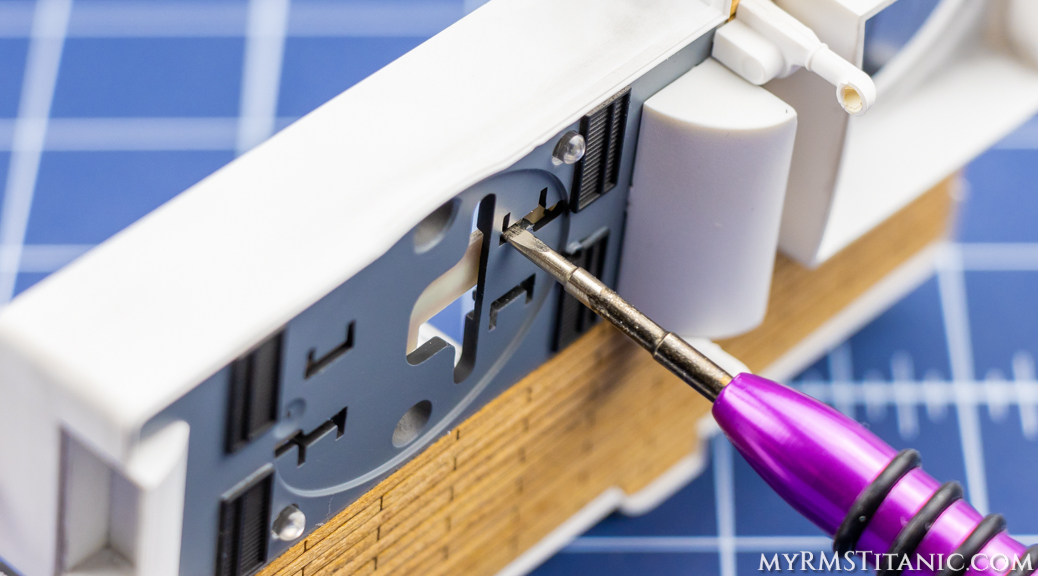 Retrieve your second Funnel assembly from Issue 19, remove the Grille, and slide the Tank assembly out.

You may want to remove the Tank from the first Funnel as well. This is to make sure the glue we used to install the Funnel details does not lock the Tanks in place. If you find yours stuck, push up on it through the hole in the bottom of the Funnel with a long tool such as screwdriver: 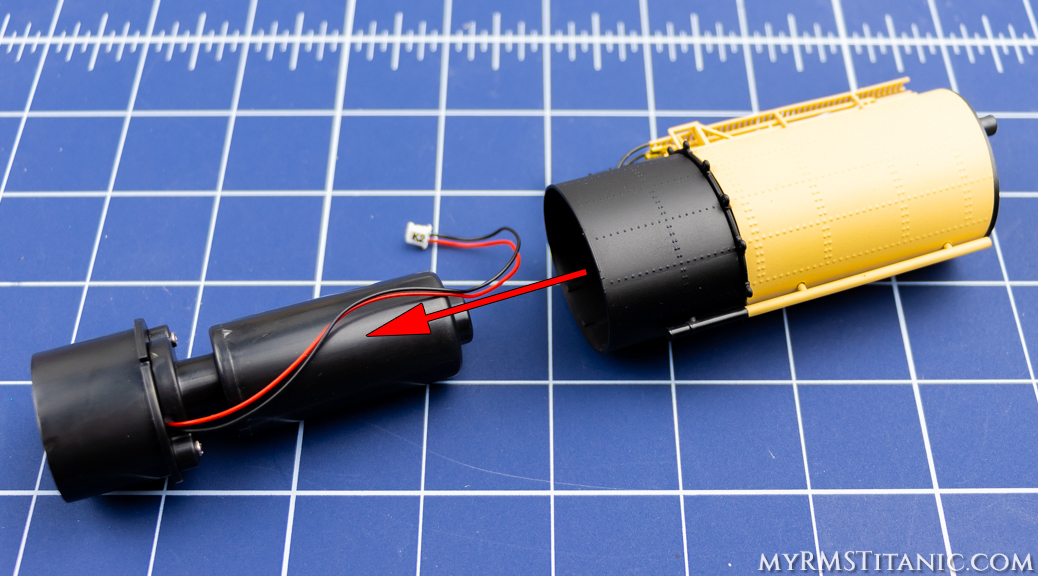 Using the Plastic Band, secure the wires of the Smoke Generator to lower part of the Tank, keeping the wires taut as shown: 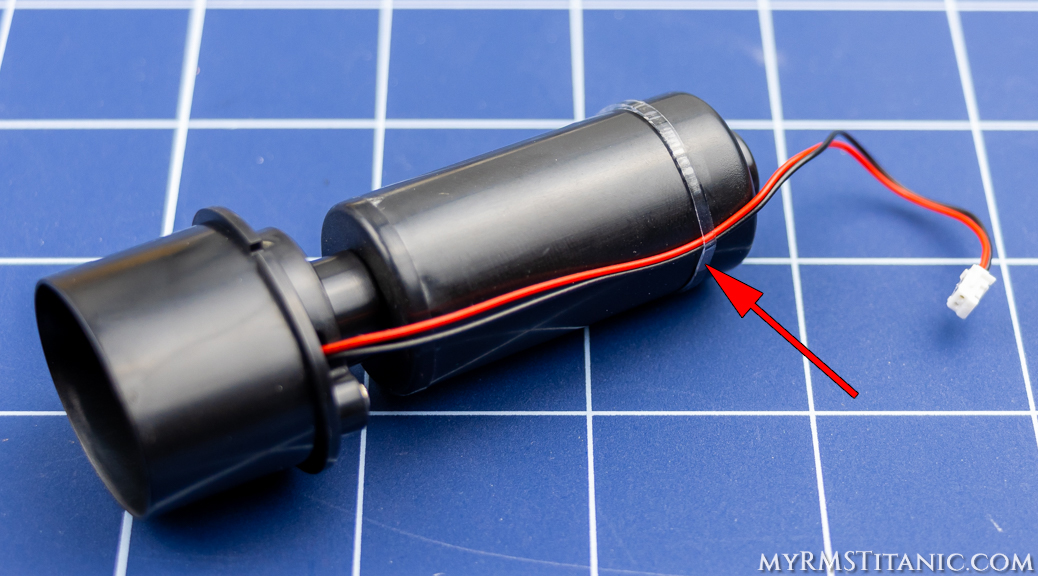 Thread the larger female end of the Extension Cable K2 up through the second Funnel: 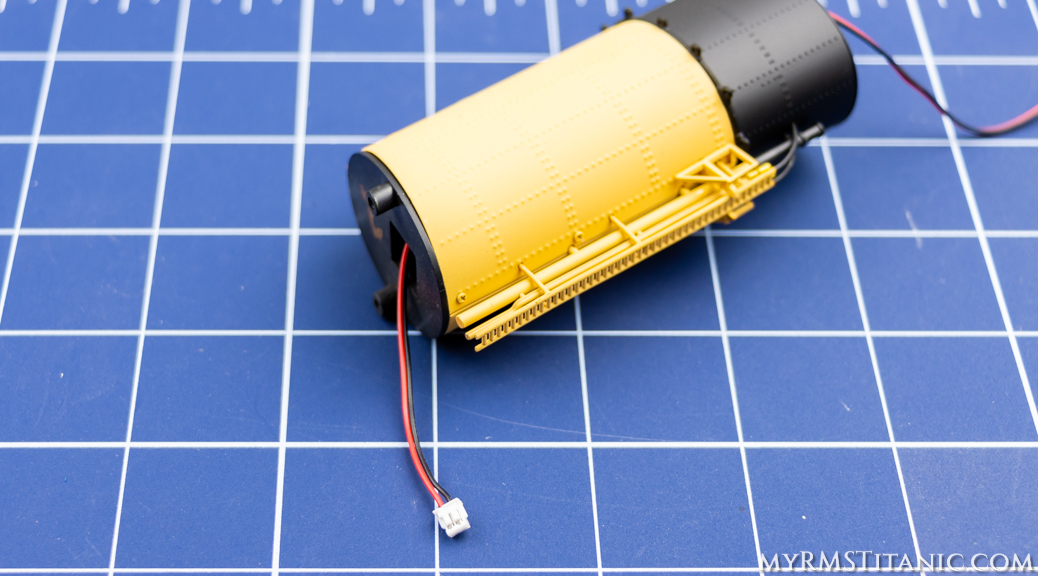 Thread the lower (smaller plug) end of the Extension Cable K2 down through the larger opening at this location of the First Class Stairwell superstructure: 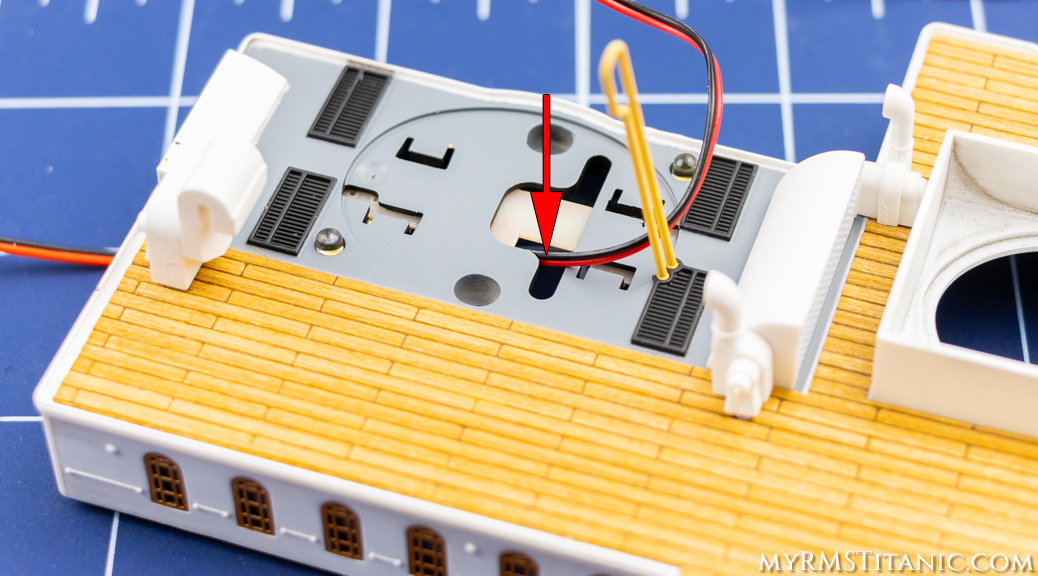 As you feed the Cable down, fit the two posts of the second Funnel into the matching holes of the superstructure, aligning it as shown:

Go slowly and take care not to damage the nearby Water Pipe that fits outside of the Funnel: 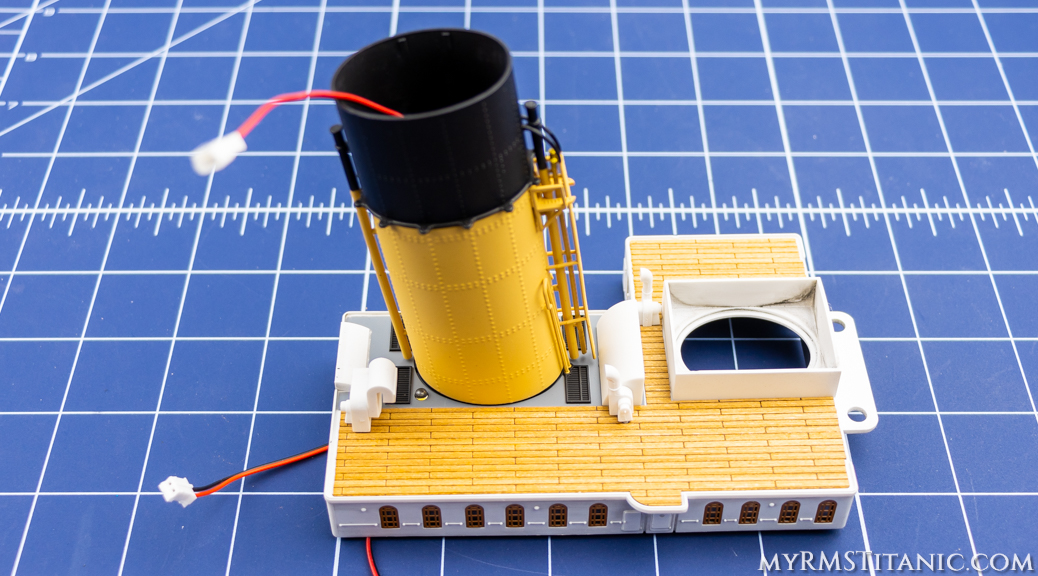 Secure the second Funnel into place from below with two (2) AP screws: 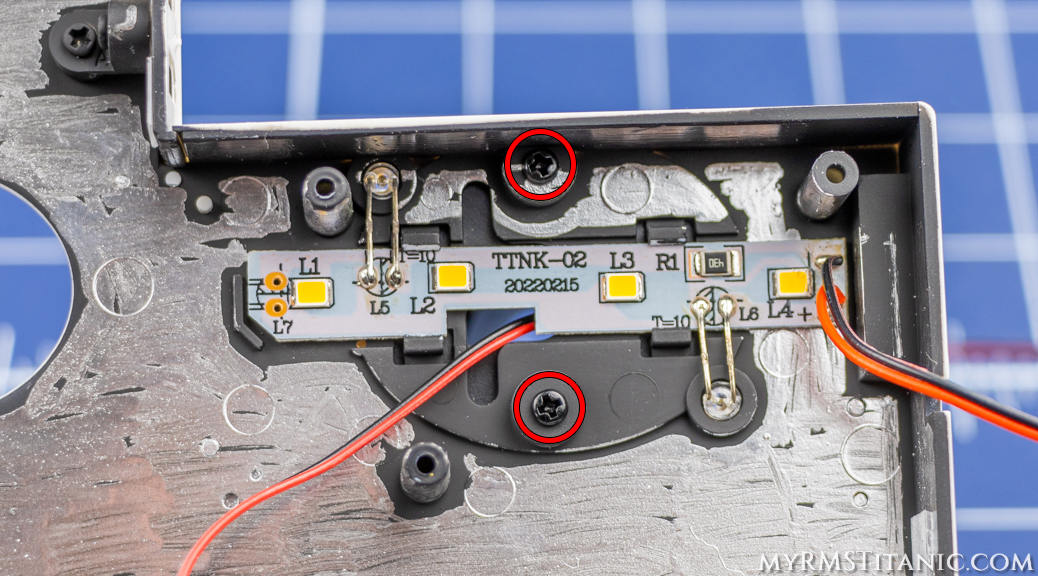 As before with the four Water Pipes on the my first Funnel, I removed the single Water Pipe for this second Funnel, snipped off the bottom pins, and glued it into place (vertically and straight up against) the Funnel surface: 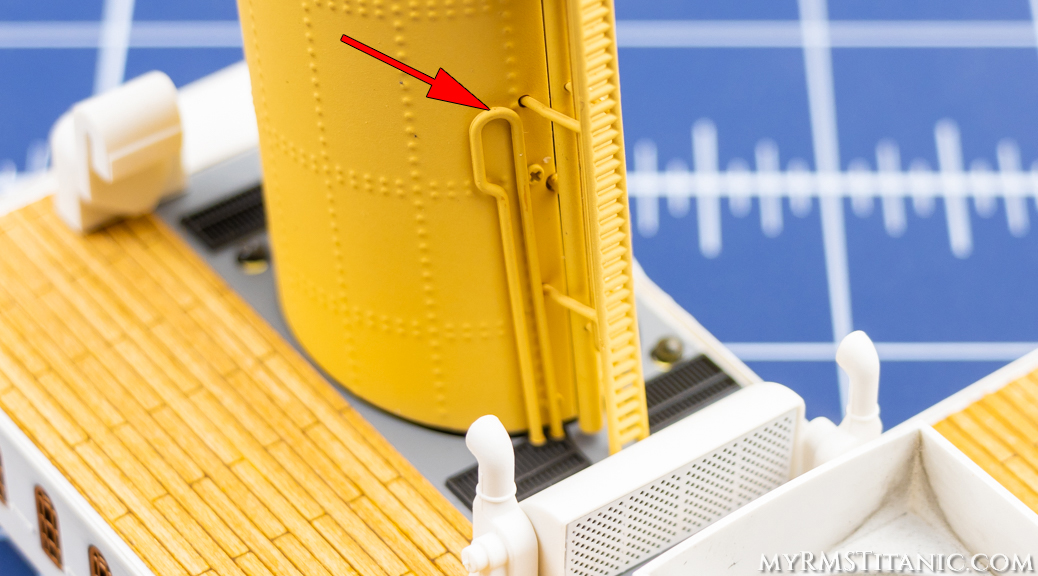 Once this Funnel is secured, the Grilles on top of both Funnels can be reattached. Also, this is where I decided to add frosted window ‘glass’ to all of my window openings. I wrote up a entire Frosted Windows page explaining how I did it. With my ‘glass’ installed, I connected the LED Strip again – I love it! 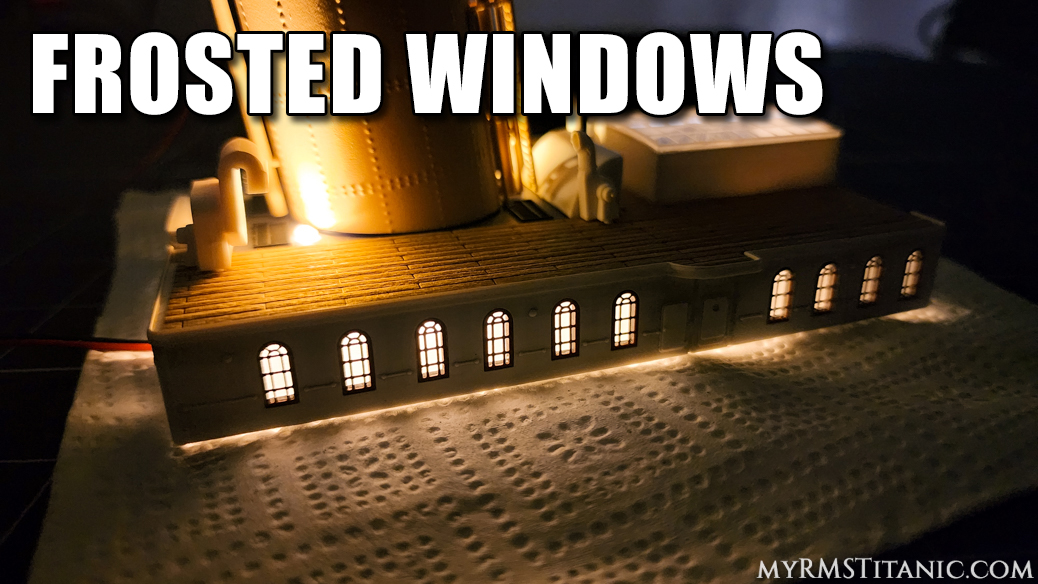 Both of our first two Funnels have been installed and they look fantastic! To be honest, the Windows we added do not look that bad and add a nice color contrast to our superstructures. I think we are nearly done assembling these deckhouses! Keep the unused Arched Windows stored safely until we need them again in a later issue.