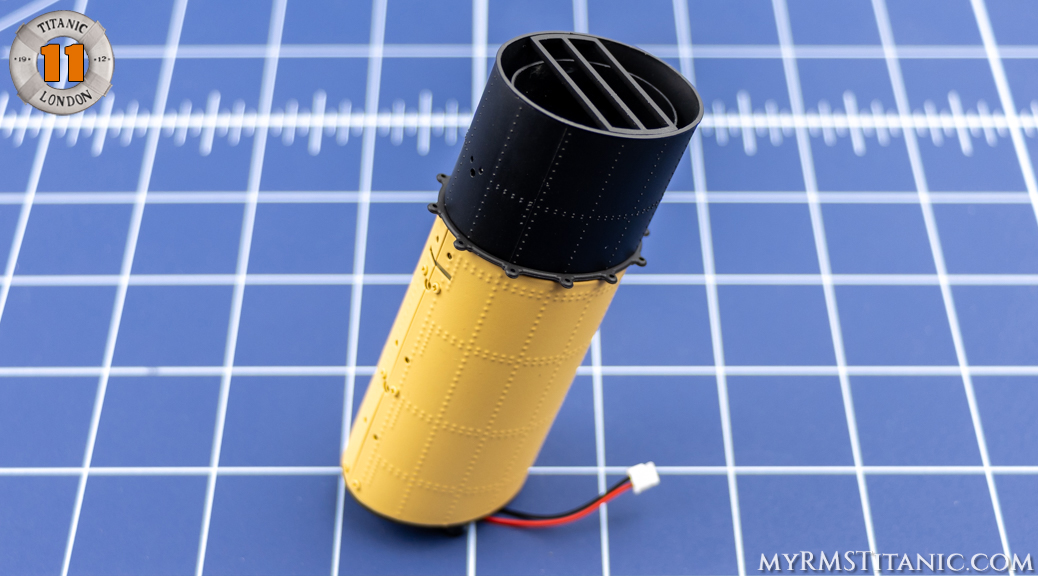 In this issue, we will build the first of four Funnels for our Titanic partwork model.

Materials: The Funnel Plating and Spring are metal, the Filter is cotton, and the rest of these parts are plastic.

Press the long, straight pin of the Spring fully into the center at one end of the Filter, as shown: 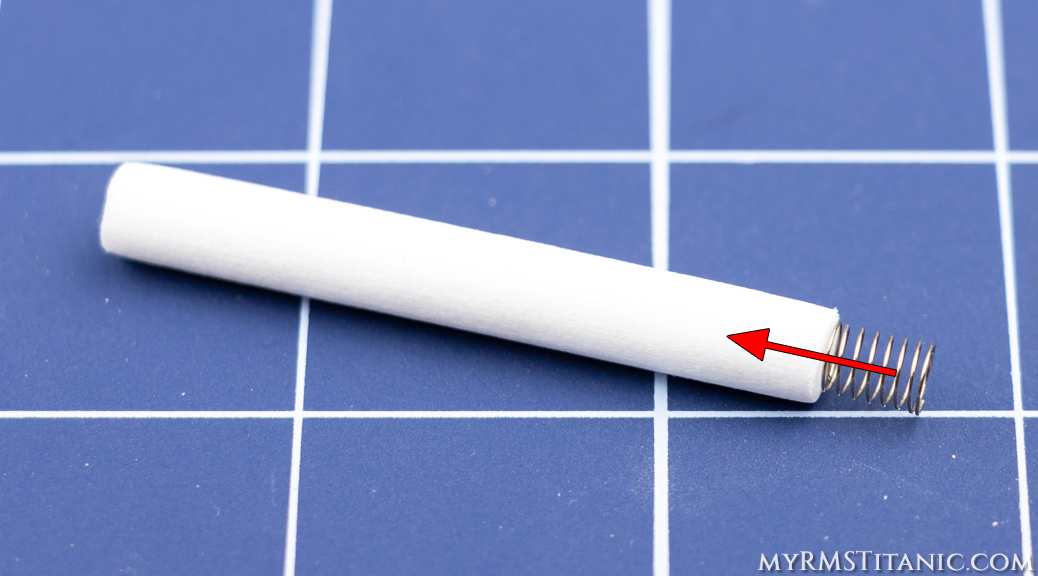 Insert this Filter assembly (Spring end first) into the Tank, as shown. Once installed, the Filter will stick out the top of the Tank and you should be able to push it into the tank against the resistance of the Spring: 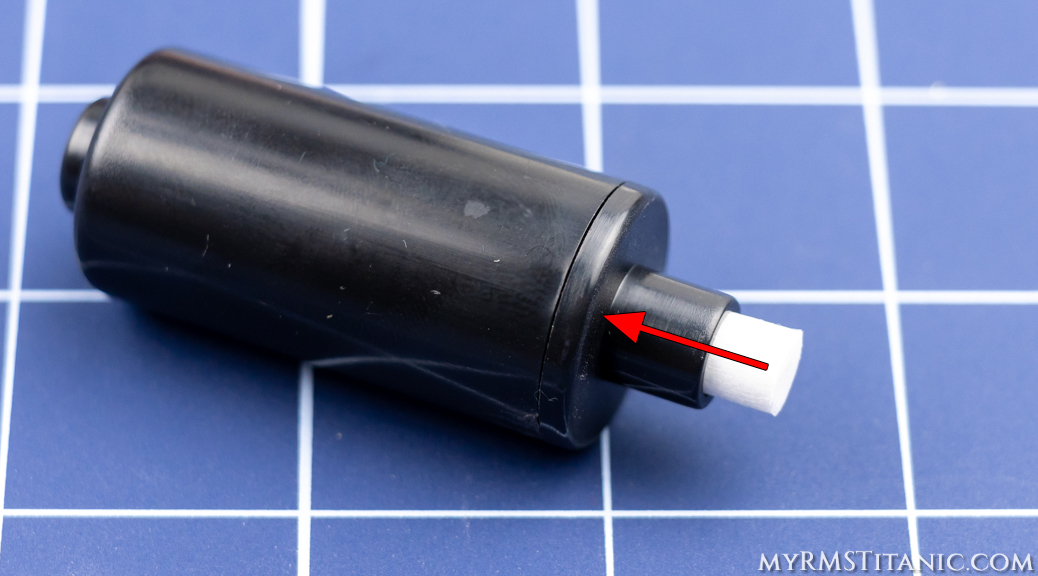 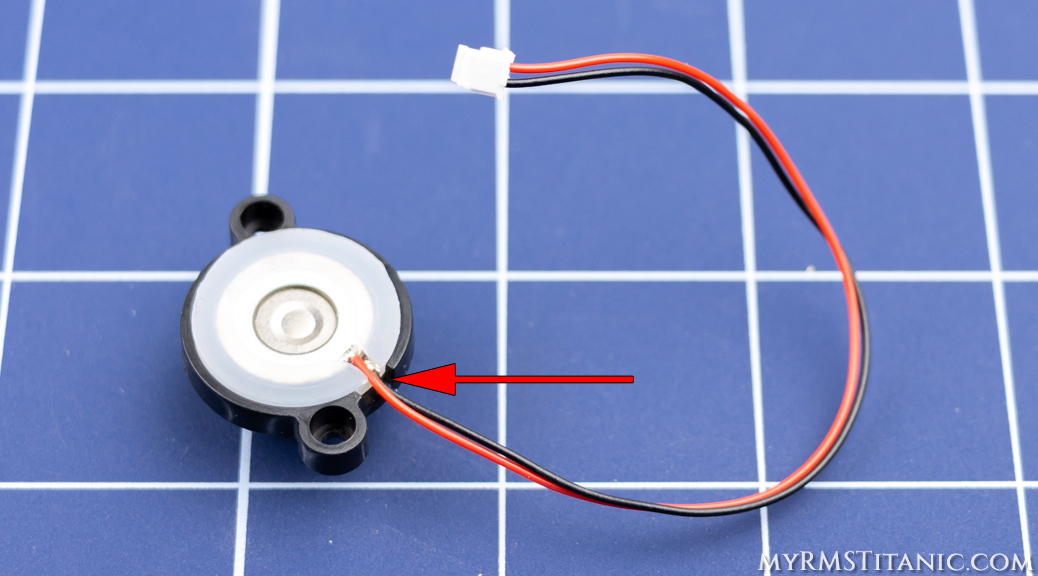 Fit the two posts of the Funnel Interior down into the matching openings on either side of the Smoke Generator Holder, as shown. Then, secure these parts together from the other side with two (2) EP screws: 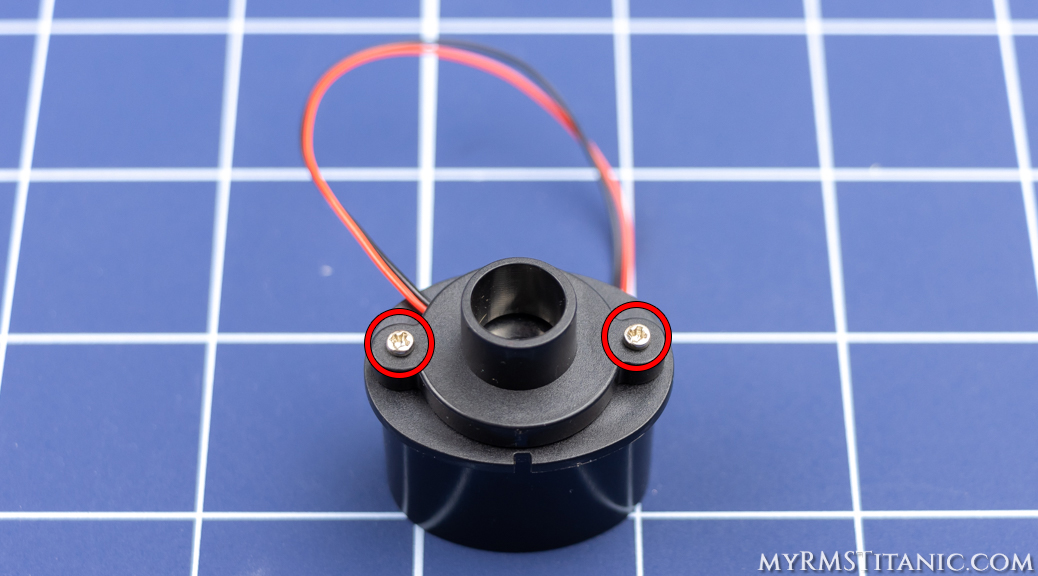 This Smoke Generator assembly can be fitted over the top of the Tank, as shown. This is meant to be removable so the tank can be refilled, so do not glue these parts together.

Once we are ready to test this, the Filter will act as a wick to bring water up to the bottom of the Smoke Generator: 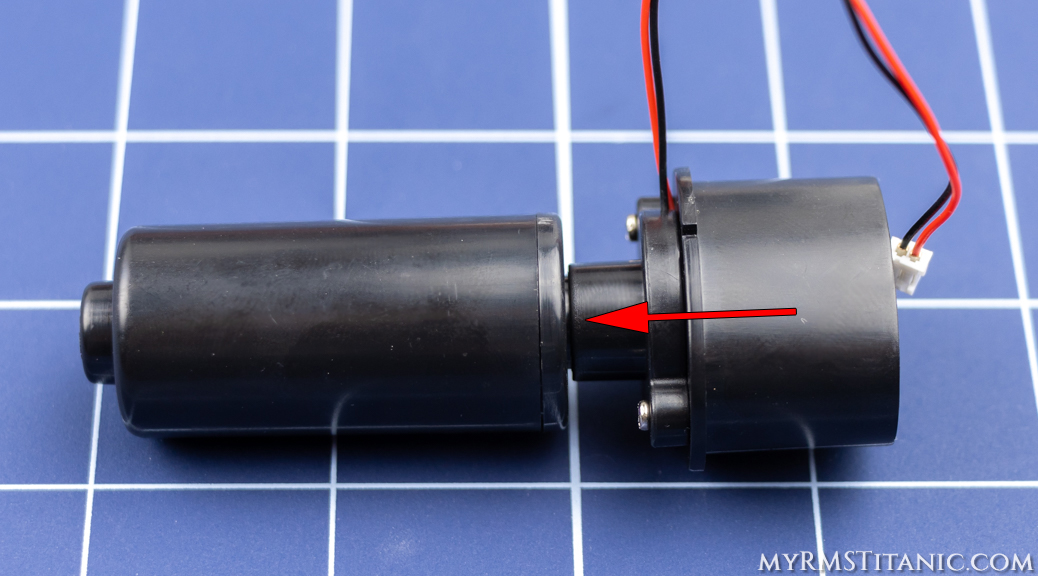 These steps required both hands, so I could not easily take ‘in-progress’ photos.

Once the Funnel Plating was secured to the Funnel, I airbrushed it with a few coats of the Mission Models British Sand Yellow acrylic paint. This is the color I am using to better recreate the ‘light mast’ White Star Buff color. I painted it after assembly so it would hide the chrome of the screws: 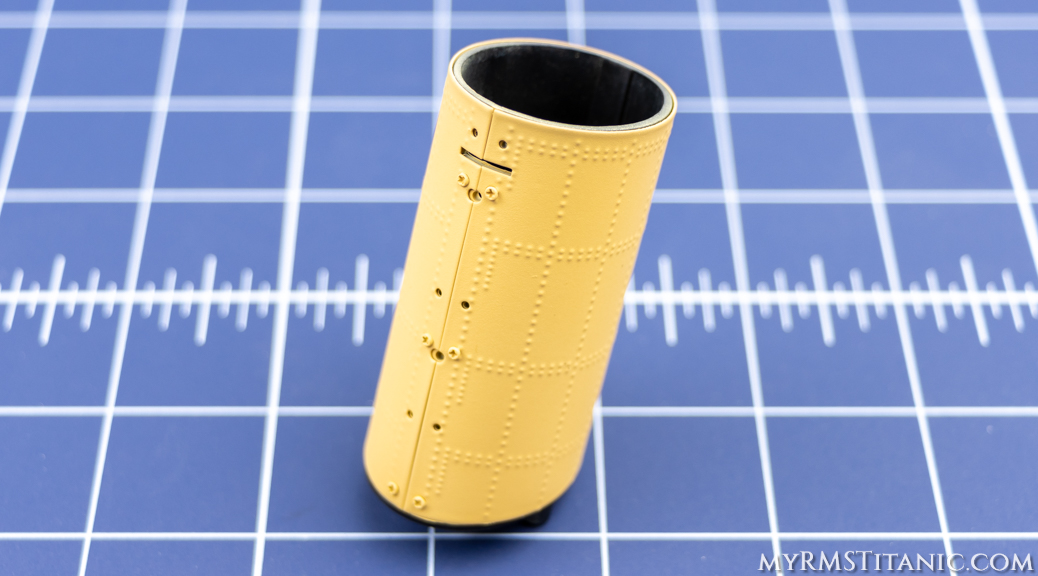 Slide the Stay Collar over the end of the Funnel Cap, aligning the two different-sized tabs to the matching slots. The smooth side of the Stay Collar should be facing up. Do not use any glue here.

This is the smooth side of the Stay Collar: 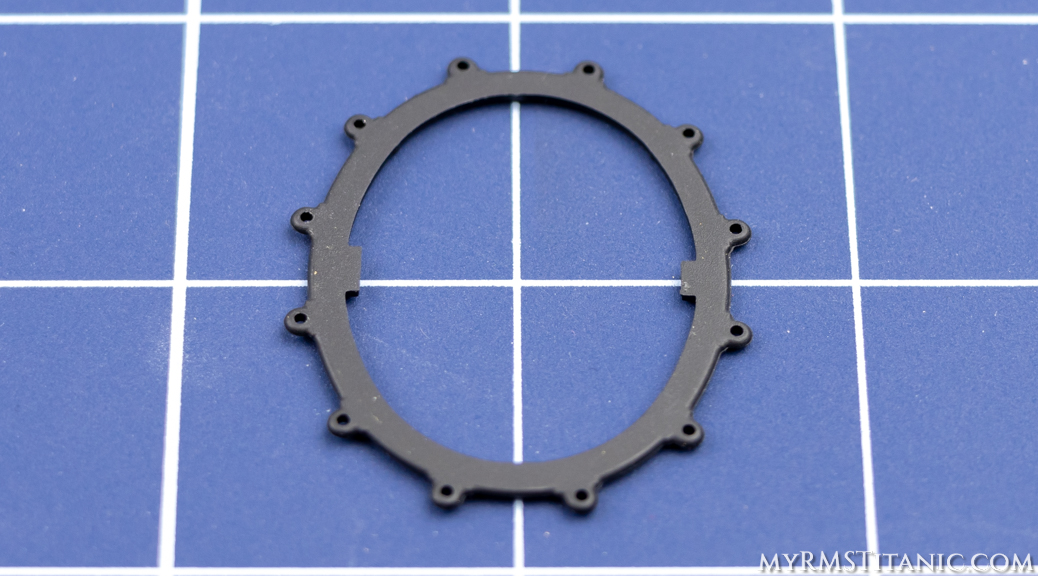 That side butts up against the larger part of the Funnel Cap, as shown: 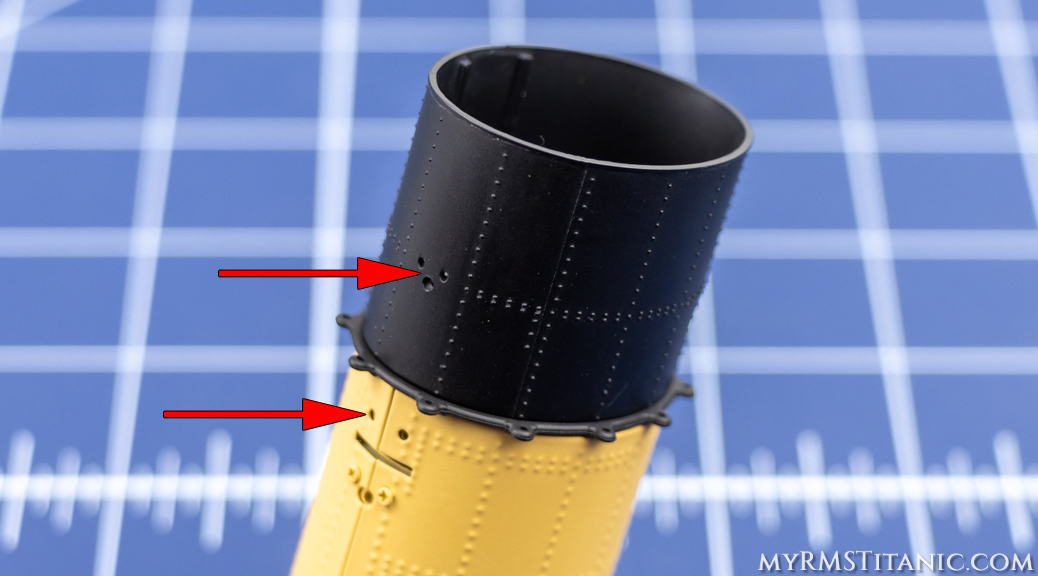 This is also a good time to slide the Tank in and out of the Funnel a few times to make sure it moves easily. The Tanks are intended to be removable so they can be refilled once the model is complete: 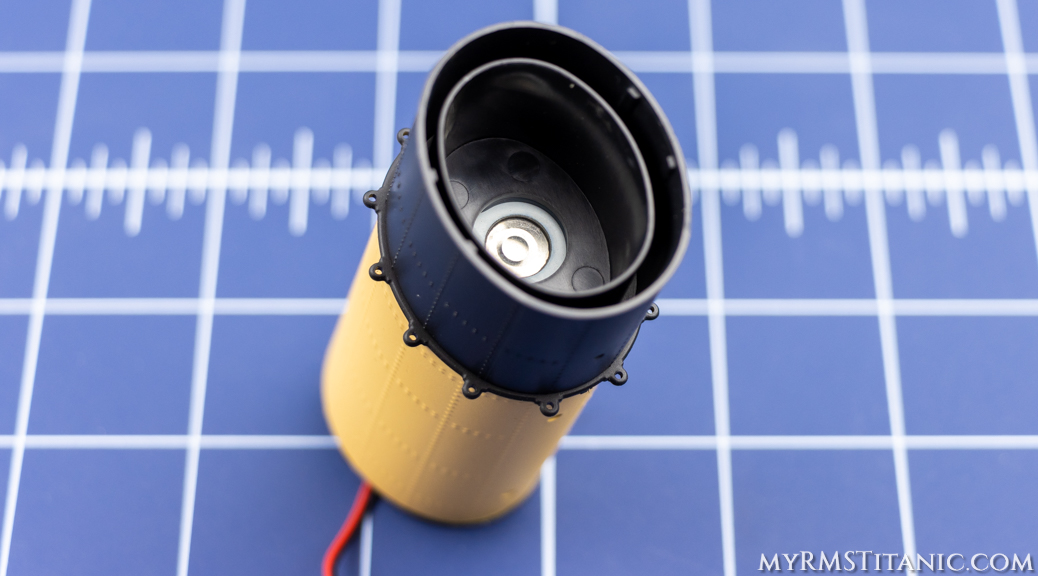 As I am not sure all four funnels are identical, and I know we will be working on more than one Funnel at a time, I marked the bottom of this first Funnel with the number ‘1’ to identify it later on: 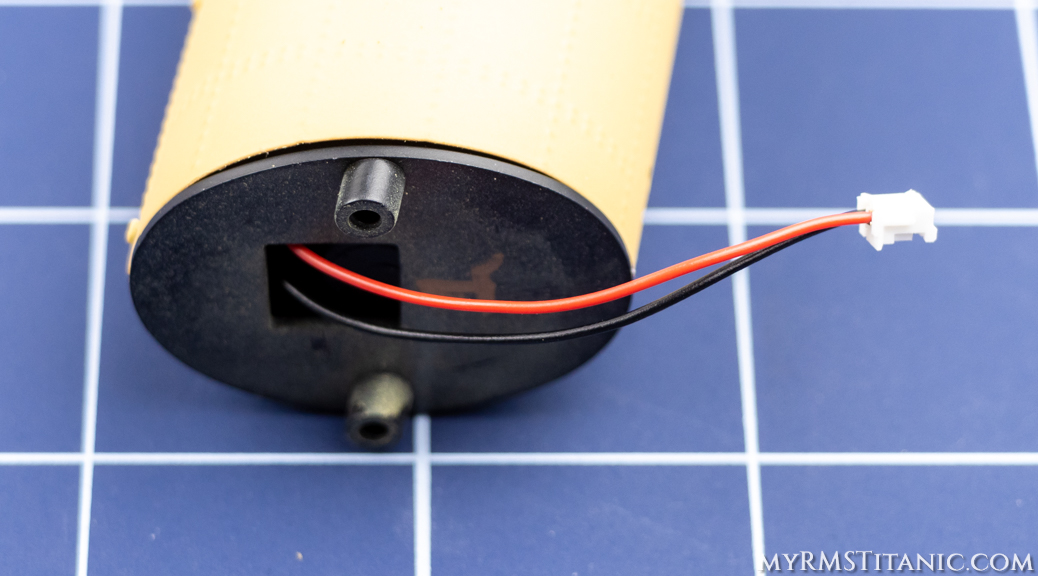 Set the Grille inside the top of the Funnel Cap as shown. Do not glue it into place.

Inside the top of the Funnel Cap are four small tabs, two on each side:

The bottom of the Grille has four matching recesses: 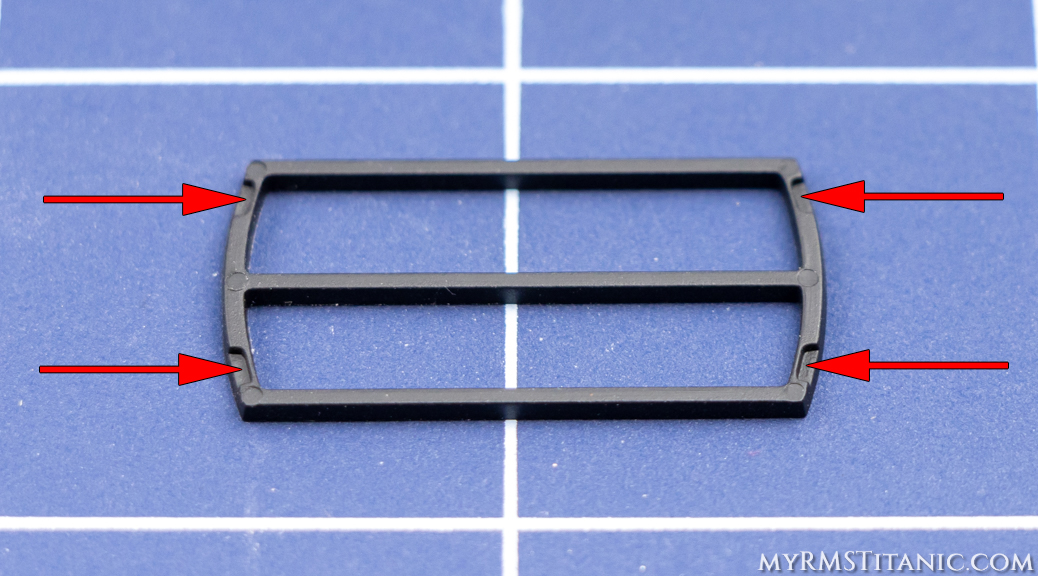 I found that if we hold the Grille by the long sides, we can gently set it down on the tabs without dropping it into the Funnel. Since this Grille is loose, you may want to use a piece of tape over the top of the Funnel to keep from losing it. I will just keep it stored safely in my screw box for now: 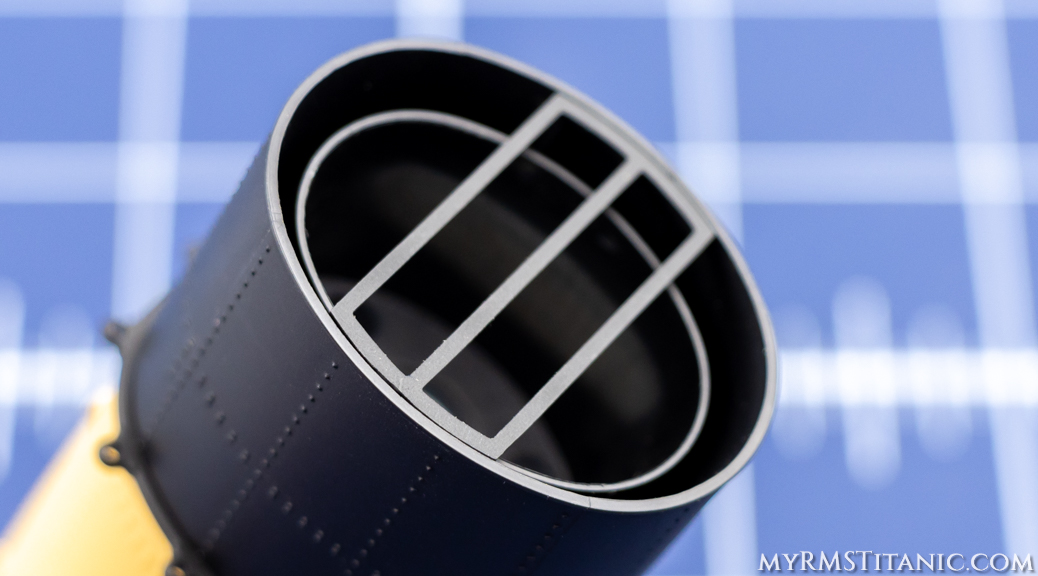 I was hoping for a bit more rivet detail on the Funnel Casing, but we will be adding a bunch of bits to it soon anyway so hopefully it will look good overall. The Smoke Generator setup is an interesting design and I am curious to see how it will all work later on.